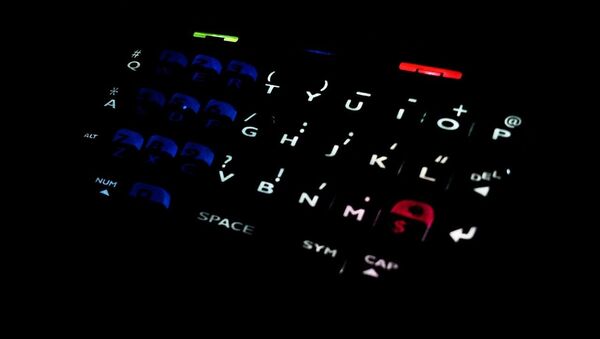 © Photo : Pixabay
Subscribe
International
India
Africa
Police in the Netherlands claim Ennetcom ran an encrypted Blackberry network which allowed organized criminals to exchange secret messages around the world, but the firm has denied the accusations and claimed prosecutors were on a "fishing expedition."

Ennetcom was run by Danny Manupassa, 37, who was arrested last year on suspicion of money laundering and possession of illegal weapons.

The company's servers, based in Canada, were taken down in April 2016 and their contents were copied and sent to investigators in the Netherlands, who have been looking into a series of murders involving the underworld and biker gangs.

Ennetcom sold modified BlackBerries for 1,500 euros (US$1,590) and were able to wipe the data off them remotely.

Dutch investigators, who believe the phones were used by biker gangs and drug smugglers, traced the data back to an internet hosting company, Bitflow Technologies, in Toronto.

Riaz Timol, a lawyer for Bitflow, told the National Post his company was innocent and said: "They don't know what's on the servers. They just rent space to people."

Thursday, March 9, following months of trawling through data after breaking encryption keys, prosecutors said they had managed to access 3.6 million encrypted messages, which contained evidence that could help to solve numerous murders, robberies and drug deals.

The prosecutors said Ennetcom had sold the devices to 40,000 people and was "the biggest provider of encrypted communications to criminals in the Netherlands, with sales points in Western Europe and South America."

But Ennetcom has hit back and a statement on its website claimed the police had acted under "false pretences."

"The seizure of the servers was, so it seemed, more an attempt by the public prosecution to gain access on improper grounds to an immense amount of data of tens of thousands in order to 'catch fish with a trail-net,' " they added.

Ennetcom said it was akin to plundering the servers of KPN — the biggest mobile phone network in Holland — to find out who was sending messages about criminality.

The company has styled itself as data protection pioneers who offered defense against cybercrime. They said they provided protection from hacking and snooping for people who had genuine concerns about their privacy.

Last year Amnesty International found BlackBerry was among the worst performing in a list of the most popular messaging apps.

Ennetcom, which is based in the Dutch city of Nijmegen, said today its clients including government agencies and businesses "that wish to safely communicate without being hacked without any criminal reasons."

It also denied using any special encryption keys and claimed it used Pretty Good Privacy (PGP), which was made by Symantec, the giant US software company.

"There are many other companies that sell their PGP products in the same way," Ennetcom said.

The company also said the figure of 3.6 million encrypted messages was misleading and that: "One message is part of a conversation so consecutive 'yes,' 'and then,' 'what do you mean' are three messages in one conversation."

There is no doubt encrypted BlackBerries are popular with top-level criminals, as was proved in a high-profile gun-running case at London's Central Criminal Court last year. The trial at the Old Bailey heard that a group of British gangsters brought weapons in from Slovakia and used encrypted PGP Blackberries to communicate with each other. The encryption was finally broken by experts with the Royal Canadian Mounted Police, leading to their convictions.

One of the secret messages sent by ringleader Harry Shilling to an accomplice on landing the guns successfully in Kent was: "We are now officially gangsters."

Shilling, who had smuggled 31 Czech-made VZ58 assault rifles — the same type used by the Charlie Hebdo killers in Paris in January 2015 — and 1,500 rounds of ammunition into Britain, was jailed for 30 years and Defraine for 27 years.