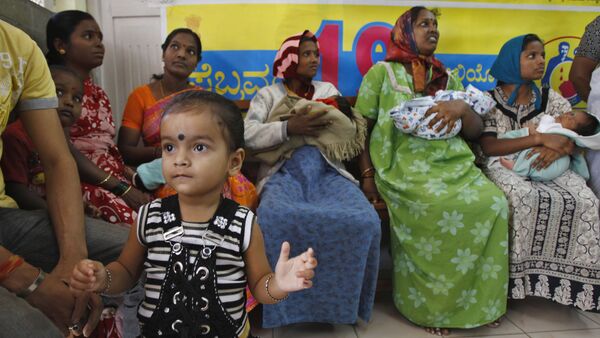 Awaiting presidential approval, the new law puts India among a few countries like Canada and Norway which have long periods of maternity leave.

India Unveils New Formula to Speed Up UN Security Council Reforms
New Delhi (Sputnik) – Indian women working in the formal sector will now be entitled to 26 weeks’ paid maternity leave up from the existing 12 weeks with Parliament on Thursday clearing a bill that will benefit 1.8 million women. On the other hand, there is no policy on paternal leave, a much demanded facility.

The law, once it gets presidential assent which is a mere formality, will apply to all business establishments employing 10 or more people. The entitlement, however, is restricted for only the first child. For third child, the leave will be only for 12 weeks.

The Maternity Benefit (Amendment) Bill, 2016 was passed by the lower house on Thursday, months after the upper house cleared it. The Maternity Benefit Act, 1961 protects the employment of women during the time of her maternity and entitles her full paid absence from work to take care for her child.

The amended law also makes it mandatory for every establishment with more than 50 employees to provide creche facilities within a prescribed distance.

India is now among select countries like Canada and Norway, where maternity leave is 50 weeks and 44 weeks, respectively, which have provided working women paid leave for maternity care. Some countries like Britain give a year’s off to parents of newborn children.

“This is my humble gift to women, a day after the world celebrated International Women’s Day,” said Bandaru Dattatreya, India’s labor minister. He also pledged to ensure that maximum benefits reach pregnant women.

India’s women and child development minister Maneka Gandhi also hailed the passage of the bill calling it a “historic” decision.

“This is a historic decision taken by our government. I had requested Honorable Minister for Labor to make these changes in relevant laws and I am grateful to him for taking up my request. While congratulating all working women who are planning to have a child, I assure you that we will continue to work for women in the country,” she wrote a message on Change.org addressing the women who had petitioned her on the issue.

A four-hour debate preceded the passing of the bill with many lawmakers from the Opposition benches demanding paternity benefits too. Indian men employed in the central government get 15 days paid leave. The private sector in India doesn’t allow paternity leave, generally, though some exceptions exist. Unlike India, the United States doesn’t provide either maternal or paternal leave.

The move to increase maternity leave to six months has raised concerns among the private sector. “To be out of touch with work for six months, cope with changes at the workplace in that long absence and then to expect the employee to function at optimal capacity on her return is unfair on the new mother,” Chaitrali Singh, Head-HR, ZS Associates, a global consultancy, told Firstpost.