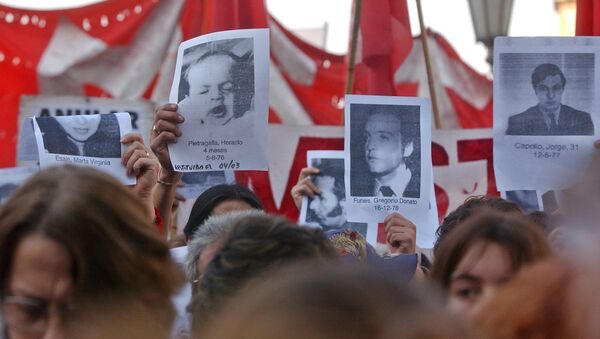 Chris Summers
All materialsWrite to the author
The chief prosecutor in the trial of 55 former Argentine Navy officers and civilians accused of murder, torture and the illegal appropriation of orphaned children during the country's infamous "Dirty War" says he expects verdicts by July.

In an exclusive interview Abel Cordoba told Sputnik the trial was the "last opportunity in our history" to expose what happened under the military junta between 1976 and 1983 and "give a public judgement" about what is not socially acceptable. 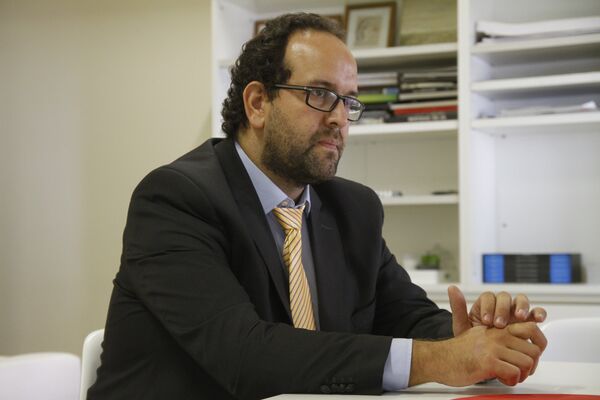 Over the next seven years more than 6,000 left-wing activists and intellectuals were secretly abducted and held in torture centers around the country, before being killed.

The human rights abuses only ended with the restoration of democracy in 1983, which followed Argentina's defeat by Britain in the Falklands War.

One of the most notorious torture centers was the ESMA (Naval Mechanics School) in Buenos Aires, where hundreds were kept hooded in terrible conditions.

When the torturers were convinced they could get no more information out of their victims they would drug them, put them on Navy planes and drop them into the ocean.

"The mechanism of death ensured there were no witnesses. It was often claimed to be an act of God. Some pilots said some people fell like 'ants,' " Mr. Cordoba told Sputnik.

The so-called "desaparecidos" (disappeared) included pregnant women, whose babies were taken away from them and adopted by military families after their deaths under what was known as the Plan Sistematico.

The Grandmothers of the Plaza De Mayo organization estimate 500 children in total were taken, 280 of who passed through ESMA.

In 2014, Jorgelina Molina Planas, 43, told The Guardian how it had taken years for her to finally accept her true identity after being told by those who adopted her that her real parents were terrorists who had "neglected" her.

"Those who survived ESMA testified about seeing the pregnant women… They knew babies were born and the gender in some cases and even rumors of who had taken the babies."

Around 124 of those children have since been identified, most of whom have abandoned their adopted parents, who lied to them for so many years.

Mr. Cordoba also revealed some of the women who were held at ESMA were taken out of the torture chambers and forced to accompany naval officers to parties in a bizarre charade.

"It was a method of manipulation that implied a very profound way of destroying the identity of the victims," he said.

The ESMA Mega Trial, as it is known, has been dragging on for four years and during that time the number of defendants has fallen from 68 to 55 as death or infirmity has intervened.

Among those on trial is Juan Carlos "Nino" Rolon, a naval intelligence officer, who married the niece of then Economics Minister and found a company which disposed of the properties seized from the desaparecidos. 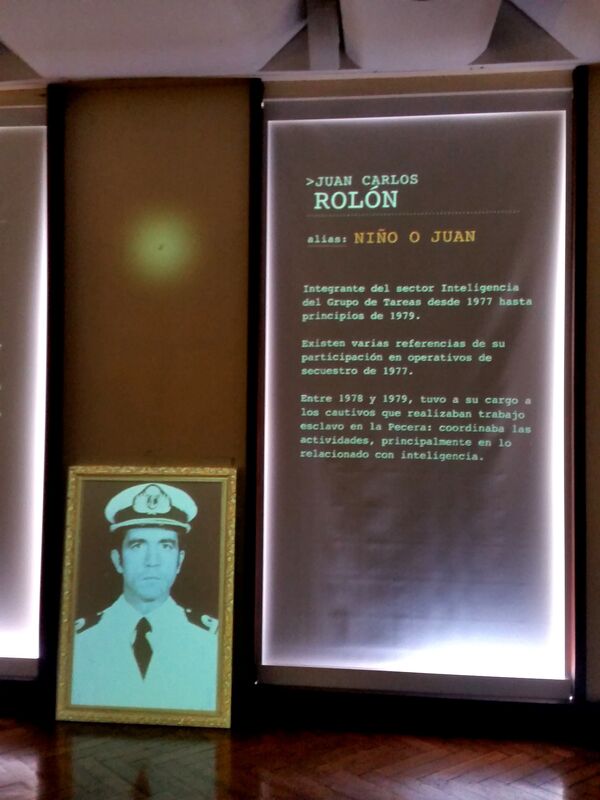 Lieutenant Juan Carlos Rolon, one of the most important of the defendants who are on trial. This picture at the ESMA Museum shows him as he was in the late 1970s in navy uniform.
© Sputnik

Another key defendant is Orlando "Fafa" Pittana, who is accused of being involved in the torture and deaths of 300 people.

After the restoration of democracy, he joined the Argentine intelligence service and is believed to have been involved in the murder of Alfredo Yabran, a businessman with close ties to then-President Carlos Menem. 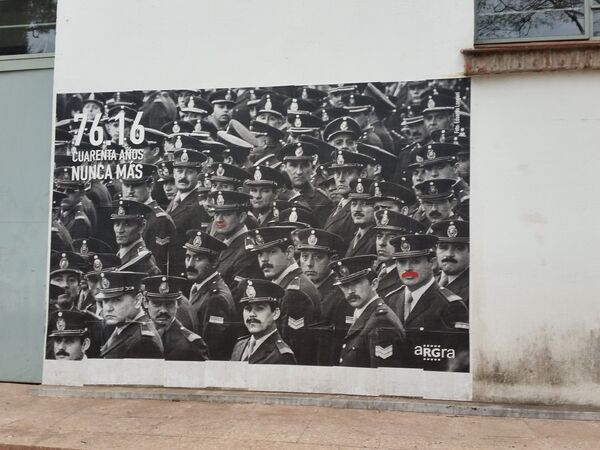 A poster-mural on a wall with an image of Argentinian military officers from the 1970s. The words denote the 40th anniversary of the coup last year and Nunca Mas (Never Again).
© Sputnik
Asked why it had taken so long to bring them to trial, Mr. Cordoba said: "It lies in the nature of the crime. They come from the heart of the power. Every part of this society was involved in this.

"There are members of the judiciary in Mendoza and Cordoba and Sante Fe who are being investigated for their role."

The defendants often speak out during the trial and their words suggest most remain wedded to the ideology which led to the human rights abuses.

Asked about that ideology Mr. Cordoba said: "They say they were defending La Patria (the homeland) and identifying the enemy.

"They say those targeted were political opponents or subversive criminals and outlaws. In this way they eliminated their identity and denied they were human beings." 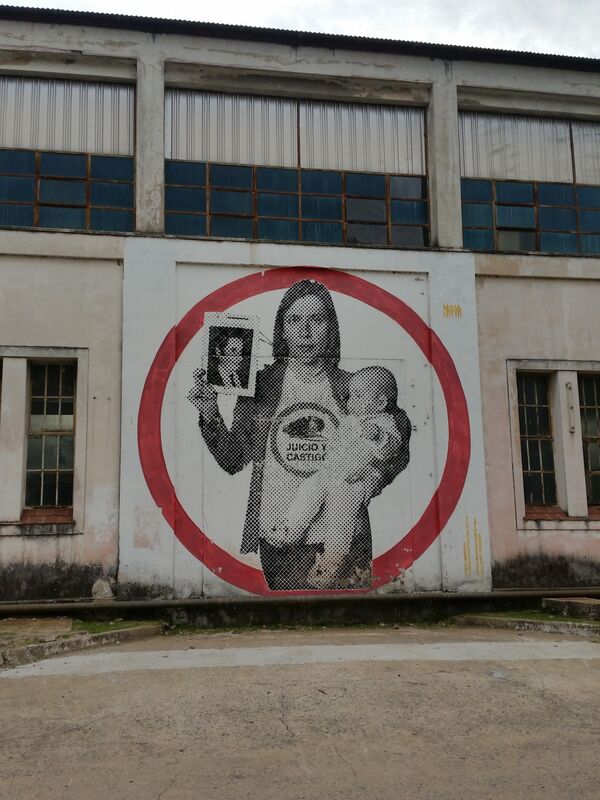 A large artwork-mural on the side of a building on the ESMA site (it is a large site, a former naval base) shows a woman and a baby. The words mean "judgment and punishment."
© Sputnik

Mr. Cordoba said the defendants had shown no remorse:

"When the victims talk about their pain they are impassive. The impact is hard for victims and survivors. They are face to face with the person they destroyed."

He added: "The defendants have the right not to answer and even the right to lie."

ESMA was handed over by the Navy in 2004 and has since been turned into a museum, which contains newspaper cuttings from the period showing how blatant lies were published in the Argentine press about fake police shoot-outs which were designed to cover up the disappearances.

Those who refused to publish the military's lies, or sought to report on human rights abuses, would themselves go missing.

In 1978 Argentina hosted — and won — the World Cup in the midst of massive human rights abuses.

"There was a modification of the process. Because of the proximity of the River Plate stadium, where the final was held, they were sensitive.

In December 2016, the Buenos Aires Herald reported how historical documents had revealed the US government was aware of Argentina's human rights abuses, but did nothing to stop it because the junta was seen as a bulwark against communism. 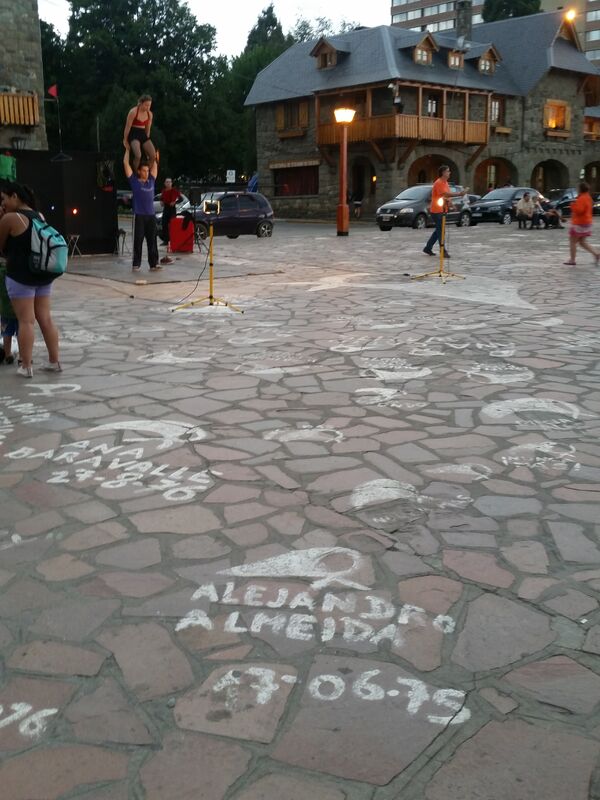 The names of some of the disappeared (and the distinctive headscarf logo of the Mothers of the Plaza de Mayo) are painted on the ground in the main square in the town of San Carlos de Bariloche, hundreds of miles from Buenos Aires.
© Sputnik

Last year, President Barack Obama admitted the US had failed to stand up for human rights under the junta.

"This is the last opportunity in our history to give a public judgement and to expose what happened and also to underline the limit of what could be admitted as socially acceptable," Mr. Cordoba concluded.

Admiral Emilio Massera, the former head of the Navy and the man whose idea it was to use ESMA as the main torture center, died a free man, in 2010, having been pardoned by President Menem in 1990.

Massera's funeral had to be conducted in secret because there were fears that a mob might try to mutilate his body.