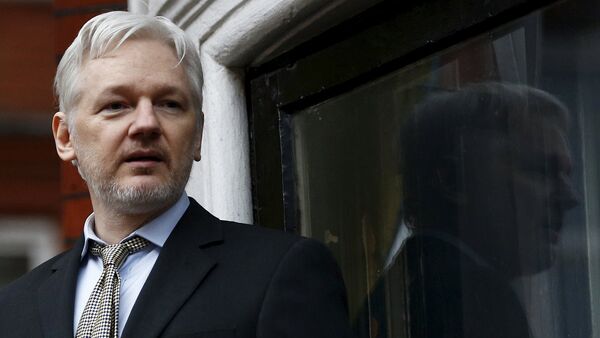 WikiLeaks is holding a press conference following the release of the first part of 'Vault 7,' the largest archive of CIA-related classified documents yet.

Tip of the Iceberg: Extent of #Vault7 Leak 'Shocking', More to Come
Follow the live feed to find out more. Notice that there seem to be interruptions with the stream. Sputnik updates the video in this article whenever possible. Here are the first, second and third parts of the press conference.

Commenting on the release of 'Vault 7,' Assange said that the scope of the CIA's covert program is unprecedented.

"This is a historic act of devastating incompetence, to have created such an arsenal and then stored it all in one place," Assange said, adding that the cyberweapons program is dangerous as it is difficult to control cyber weapons and keep them safe from hackers.

"It is impossible to keep effective control of cyber weapons… If you build them, eventually you will lose them," Assange said.

"We have decided to work with [the technology manufacturers] to give them some exclusive access to the additional technical details we have so that fixes can be developed and pushed out," Assange said, promising to "publish additional details about what has been occurring" as soon as "this material is effectively disarmed."

So 'Russian Hackers' Were CIA All Along? Twitter Reacts to WikiLeaks CIA Dump
The first question was on the legality of the CIA conducting hackings. "The CIA has a history of penetrating not only political parties overseas <…> it has a habit of interfering inside the US as well," Assange said. "It's how intelligence institutions behave."

When asked how many parts there could be in this investigation, Assange said that since the CIA archive is big they are going to need a lot of help with it from journalists and tech experts.

Then another user asked Assange whether he has ever been paid by the Russian government: "No," Assange replied, pointing out that it is symptomatic that mainstream media outlets like the BBC prefer speculating about his alleged ties with Russia even though they have been presented "a huge scoop" on the CIA.