New Sheriff in Town: Drop in Illegal Immigration Comes Down to Trump's Rhetoric 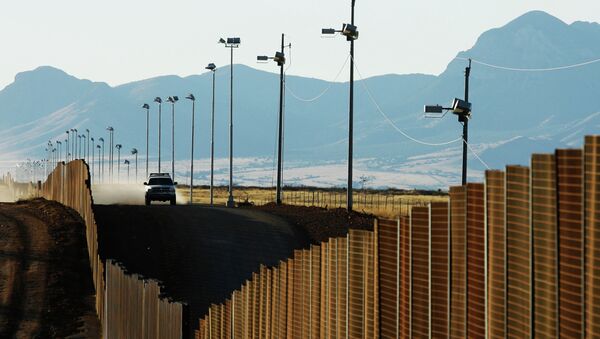 © AP Photo / Guillermo Arias
Subscribe
International
India
Africa
The US Customs and Border Protection Agency has reported a 40% drop in the number of illegal crossings at the southern border with Mexico in the first month of Trump's presidency. Speaking to Radio Sputnik, immigration expert Westy Egmont explained that that the dropoff can be attributed to a deterrent effect coming from officials' harsh rhetoric.

In its report, the agency specified that it usually registers a 10 to 20 percent increase in the number of illegal border crossings between January and February. However, during this timeframe this year, "the flow of illegal border crossings as measured by apprehensions and the prevention of inadmissible persons at our southern border dropped by 40%," the agency said Wednesday.

Illegal Crossings at US Southern Border Down in 1st Month of Trump Presidency
"Since the administration's implementation of executive orders to enforce immigration laws, apprehensions and inadmissible activity is trending toward the lowest monthly total in at least the last five years," the agency added.

Speaking to Radio Sputnik about the implications of this steep decline in illegal immigration, professor Westy Egmont, director of the Immigrant Integration Lab at Boston College, shared his thoughts on the possible causes behind the drop.

"There is no doubt a deterrent effect that comes from a lot of harsh rhetoric and a lot of fear," Egmont said. "It's unusual to see this pattern of decline, and I think a lot of very vulnerable people who have been coming up and across Mexico…the flow that's come from our south into the United States has certainly heard loud and clear that there's a new sheriff in town. There's a harsh rhetoric, and there is a clear desire to catch and detain [illegals]."

US Lawmakers Urge Kelly to Reject Plan to Separate Kids From Parents at Border
Pointing to Homeland Security Secretary John Kelly's recent comments that the government may even separate illegals' families, the professor suggested that the Trump administration is putting out "as strong a message as they can that they will to try to stop an increase in any way they can" in the numbers of people coming across the border.

At the same time, however, Egmont noted that he does not believe that the drop will be permanent. "I think there is a great deal of apprehension…Right now there is a great deal of 'unknown-ness' with travel bans, confusion, rhetoric, and questions. I think that the environment is doing a pretty good job of creating fear and resistance, [meaning] that if somebody can wait, they're waiting to see how things settle out."

As for the Trump administration's plans to build a wall along the southern border, the professor suggested that given a whole slew of factors, from eminent domain, to national parks, waterways, flyways, protests by animal rights groups, etc., he finds it extremely unlikely that the entire US-Mexico border will ever have a wall. "We already have 700 miles of wall, and I think it is very, very unlikely that we'll ever see the entire border secured with a wall, per say, or a fence more exactly."

Furthermore, Egmont questioned the long-term effectiveness of a border wall as a concept. "I think that we are at a time where people will continue to find alternative routes. Migration has not ever been stopped in the world because of a wall. Even though there are now 65 walls around world, this goes back to the Great Wall of China, and for most us, this is not exactly the most progressive way of dealing with the international issues of migration."

Mexico Spends $50 Million to Aid Consulates in US Amid Deportation Fears
Ultimately, the professor suggested that so long as the problems of mass crime, corruption, poverty, war, and similar issues continue to plague some countries, "no matter how high the risk…people will [continue to] pursue the opportunity of safety, and pursue some place where there is opportunity for their family to prosper and hopefully, to get away from the things that have threaten their lives."

Accordingly, Egmont noted that "we need to find the alternative routes [through which] people can come safely into the United States, or whatever country they have chosen as their destination – never open borders, but responsible borders that have reasonable patterns and pathways for people to apply and to gain entry into the new country."