Denmark Overanxious to Covertly Push Through CETA as Soon as Possible 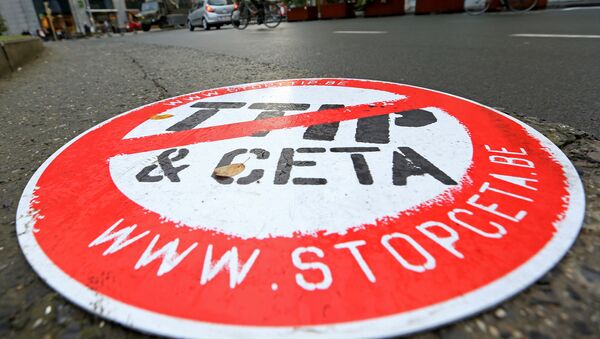 © REUTERS / Yves Herman
Subscribe
International
India
Africa
Denmark seems to be hell-bent on hammering out the EU's free trade agreement with Canada (CETA) as soon as possible. In doing so, the Danish government is looking forward to killing two birds with one stone: assuring Brussels of its participation and sidestepping civic involvement.

CETA: French MPs Want to Stop 'Anti-Democratic' Free Trade Deal
Recently, Danish Foreign Minister Anders Samuelsen put forth a bill recommending the ratification of the controversial CETA agreement without further ado. Samuelsen described CETA as "having a positive economic effect" in terms of increased trade, higher growth, a larger tax base and higher wages. Kenneth Haar, a researcher at the anti-lobbying think tank Corporate Europe Observatory and a campaigner against CETA and the Transatlantic Trade and Investment Partnership (TTIP), called Samuelsen's take "highly misleading" and claimed that it lacked proof.

"There is no proof whatsoever that CETA will provide any significant growth or a job boost. In fact, there is indication pointing in the opposite direction," Kenneth Haar told the Danish newspaper Arbejderen.

According to Jens Ladefogd, a specialist in international political economy at the University of Copenhagen, the Danish government is eager to manifest tokens of support to Brussels.

"There is no doubt that we have a government that is very pro-free trade and would like to have this agreement quickly put through, so they can send the signal to the EU and the other countries that Denmark throws its weight behind the EU's trade policy," Ladefogd told the Norwegian daily Klassekampen.

'Disdain for Democracy': UK Minister Slammed for 'Burying' CETA Debate
While other EU countries seem to be willing to hold more public debates on the much-debated matter, Denmark is poised to make short work of CETA. In Austria, the demand for a referendum over CETA has amassed half a million votes, whereas a similar proposal in the Netherlands is approaching two-thirds of the needed number of signatures.

Denmark's recent record of public ballots has been in no way complimentary for the Danish government. In recent decades, Denmark has held three referendums that have all yielded negative decisions: on the Maastricht Treaty in 1992, the euro in 2000 and finally an opt-out on home and justice matters in 2015. Danish opt-outs from European Union policies are secured under the 1992 Edinburgh Agreement, after Danes notoriously rejected the Maastricht Treaty.

The Lars Løkke Rasmussen government, which is a minority coalition government embracing the Liberals, the Liberal Alliance and the Conservative People's Party, is therefore determined to take no risks and vote CETA through as quickly as possible before popular opposition and the resistance from public organizations builds up.

Belgian Region Threatens to Hold Out Against EU-Canada Trade Deal
The urgency is embodied in the fact that Samuelsen's proposal was classified as a motion rather than a bill. This means that is it will only be given two readings in parliament, without any opportunity for trade unions, environmental groups or consumer organizations to express their opinion.

"A motion goes through much faster than a bill that is allotted three [legislative] reviews and should be submitted to external parties for consultation. A motion may be considered strictly within the government's domain and control," Dorte Sindbjerg Martinsen, a professor from the University of Copenhagen, told Arbejderen.

The controversial CETA deal, which aims to eliminate 98 percent of tariffs on exported goods and is expected to lead to a privatization of the public sector, was passed by the European parliament in mid-February, but has triggered negative reactions across Europe.