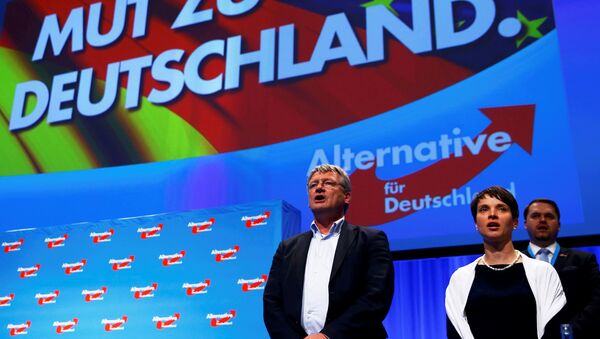 Germany's right-wing Alternative for Germany (AfD) has released a draft election manifesto which promises to achieve "minus migration" of at least 200,000 people per year.

It has also pledged to limit asylum seekers' "social and healthcare support to the strictest degree."

In addition, the AfD wants to strip criminals of German nationality, even if that means they become stateless.

"The expatriation of criminal migrants should be possible: firstly, in cases of serious criminality within ten years of naturalization; Secondly, for migrants in terrorist organizations (for example, IS); thirdly when belonging to criminal clans, even if the deportees thereby become stateless," the AfD wrote.

AfD leader Frauke Petry told German newspaper Die Welt that the measures will only apply to first-generation migrants, who acquired German citizenship after their arrival in the country.

The election pledges are several new additions to the party manifesto AfD released in May last year, which put forward a range of policies.

German Far-Right AfD Party Votes to Expel Regional Leader Over Holocaust Remark
The Eurosceptic AfD wants "the end of the euro experiment," and demands that the EU returns many of its responsibilities to national governments.

The anti-immigrant party also stated that Islam does not belong in Germany," and proposed banning minarets and the call to prayer, and the full-face veil for women.

AfD called for "more children instead of mass migration," and proposed the formation of a "nationwide system of border protection under the umbrella of the federal police."

The party was formed in 2013 in the aftermath of the European debt crisis, when it opposed the bailout deal which EU creditors struck with Greece.