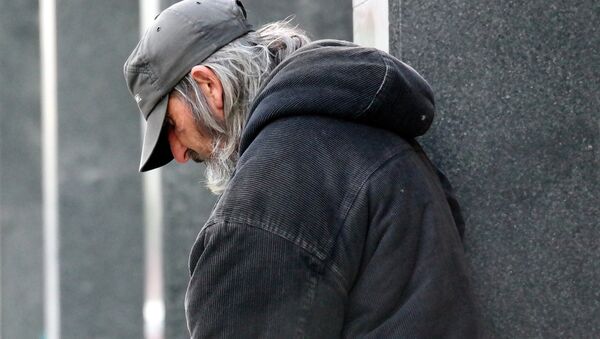 Every week, UK Home Office Immigration Compliance and Enforcement teams patrol London streets, on the hunt for rough-sleeping migrants to detain and deport - to identify their targets, they depend on tip-offs from an unlikely coalition of informants; police forces, local councils and homelessness charities.

The findings come from a report issued by not-for-profit Corporate Watch, The Round-Up. They show while the purpose of charity outreach workers is to help the vulnerable, outreach teams from charities such as St Mungo's, Thames Reach, and Change, Grow, Live are directly and indirectly aiding and abetting in the capture of rough sleepers from abroad by immigration officials.

As of May 2016, the Home Office's policy in respect of rough sleepers from the European Economic Area (EEA) is strict — if they are found to not be "exercising their treaty rights" by actively seeking education and/or employment, they can be detained and/or deported to their country of origin. The UK is the only country in the EU to allow for indefinite detention of immigrants, meaning those who fall foul of the policy can spend months or years in detention centers. Often, their only option is to return to their country of origin.

One key means by which charities and authorities collaborate are "joint-patrols," where outreach patrols are accompanied on their tours of homeless hotspots by Immigration Enforcement officers, as often as fortnightly. In all, 141 joint-patrols were conducted in Greater London last year — although this figure does not include Westminster, which refused to respond to Freedom of Information requests.

In the year to April 2016, 8,096 people were recorded sleeping rough in London, a seven percent year-on-year rise. Homelessness is clustered around the central boroughs, with Camden being home to 641, Lambeth 445 and the City of London 440, for example. However, Westminster is home to the biggest concentration of homeless individuals in London (2,657). The royal borough has actively pursued a tough approach to foreign rough sleepers, running a scheme focused on deporting such individuals, Operation Adoze, in December 2015. A Parliamentary question revealed 127 EEA nationals had been deported under Adoze's auspices by September 2016.

It is unknown how many of Adoze's victims were caught in joint-patrols. However, Corporate Watch has found there were 133 joint-patrols in Inner London boroughs in 2016 — an average of 11 each annually, or just under one a month, in each borough.

Nonetheless, joint-patrols are but a single form of collaboration between homeless charities and immigration authorities. Another, less direct and more regular approach, is the use of homeless charities to collate data on homeless migrants — outreach workers gather information on non-UK rough sleepers almost nightly, and this information is subsequently passed on by managers to Immigration Enforcement.

Hammersmith and Fulham council disclosed a "local protocol" produced by St. Mungo's for its outreach teams — workers assess the nationality of all rough sleepers they encounter and, if they are European citizens, determine whether they are "exercising their treaty rights." If an individual is failing to do so, the protocol says, the individuals' details should be passed on to authorities.

"Following this a joint-shift will be agreed with outreach, ICE, Parks Police to target/tackle these individuals," the document says. The inevitable outcome of this "tackling" is detention and/or deportation. A similar document issued by Thames Reach was also uncovered by Corporate Watch.

However, Corporate Watch is careful to acknowledge many outreach workers may be entirely unaware of the role they play in facilitating the Home Office's war on foreign rough sleepers, suggesting they are deliberately insulated from the consequences of their actions via a number of means.

"They may just see ICE officers handing out notices, while actual arrests may be carried out later, out of their sight," the organization stated.

In response, St. Mungo's issued a statement, denying it shared information with the Home Office "except in situations where people are at risk."

"We think leaving a vulnerable person to die on the streets is unacceptable. People not from the UK may not have entitlements to any benefits. This can result in complex situations for them with no access to housing or support services, which in turn results in long term rough sleeping which is harmful and dangerous. Without any intervention people would remain destitute and at real risk of harm on the streets. We are reviewing our approach across our outreach teams to ensure that we are operating to good practice in every area," it said.

Thames Reach likewise responded to the investigation, stating its partnership with the Home Office enabled the charity "to help rough sleepers move away from the streets."

"Most [homeless non-UK nationals] have no rights to welfare benefits or housing. Thames Reach can provide support to help them find legal work so they can successfully make a new life in this country. We can also help people access legal support when they have complex immigration issues to resolve. However, Thames Reach also knows from years of experience that for destitute non-UK rough sleepers, their best option is to come off the streets and be helped to return home voluntarily. Many of the people we encounter sleeping rough in the UK have homes and families in their home country," the statement said.

It added that between April 2016 and January 2017, the charity's outreach team helped 92 people to return home voluntarily, covering the cost of their travel, putting them back in touch with family and friends, and connecting them with accommodation providers and support agencies.

Homelessness has increased significantly in the UK since the financial crisis.

In London alone, homelessness is primarily spread throughout central boroughs. Less than half of London's rough sleepers are British (41.2 percent), with almost half (47.3 percent) coming from other European countries, and in particular from central and eastern Europe — above all Romania (19.5 percent) and Poland (8.7 percent).

Around 46 percent the European rough sleepers are from countries in the EEA, which includes all EU countries plus Iceland, Lichtenstein, Norway and Switzerland. There are also smaller numbers of African (5.5 percent), Asian (4.9 percent), and American (1.2 percent) people sleeping rough in London.