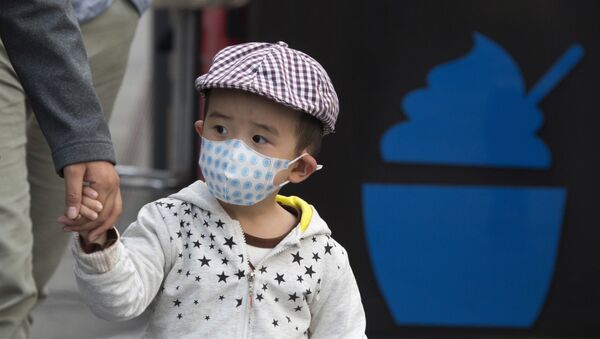 Pollution is the cause of one in four deaths among all children under five the world over, with toxic air, unsafe water, and lack of sanitation the leading causes, the World Health Organization (WHO) has found.

A pair of reports simultaneously issued by the WHO found polluted environments cause the deaths of 1.7 million children annually, and many of the deaths could be prevented by interventions already known to work, such as providing cleaner cooking fuels to stop indoor air pollution.

The cost of a polluted environment = 1.7 million child deaths a year. New @WHO report https://t.co/MbPgbpuL09 pic.twitter.com/RMFOo2malS

"A polluted environment is a deadly one, particularly for young children. Their developing organs and immune systems — and smaller bodies and airways — make them especially vulnerable to dirty air and water," said Dr. Margaret Chan, Director General of the WHO.

Harm from air pollution can affect children in the womb, and increase the risk of premature birth.

After birth, air pollution raises the risk of pneumonia, a major cause of death for children aged under five, and lifelong lung conditions such as asthma. It may also increase the risk of heart disease, stroke and cancer in later life.

A must-read for any who cares about #ChildRights. The cost of a polluted environment: 1.7million child deaths a year https://t.co/X0dvb2Wpgs pic.twitter.com/iSVMgSph4W

The reports offer a comprehensive review of the effect of unhealthy environments and found 570,000 children under five die each year due to respiratory infections such as pneumonia, while another 361,000 die due to diarrhea, as a result of polluted water and poor access to sanitation.

The WHO estimated 11 percent to 14 percent of children aged five years and older currently suffer from asthma, with almost half of cases related to air pollution. It also suggested warmer temperatures and carbon dioxide levels linked to climate change may increase pollen levels, making asthma worse.

As a result, the report calls for significant investment by national governments and international bodies in the removal of environmental risks to health. For example, tackling domestic recycling of electrical waste would cut children's exposure to toxins, which cause reduced intelligence and cancer.

Over 25% of Chinese Children Exposed to Polluted Indoor Air

In October 2016, the United Nations children's agency Unicef made the first global estimate of children's exposure to air pollution, finding almost 90 percent — two billion — live in areas where outdoor air pollution exceeds WHO limits, and 300 million live in areas with extreme air pollution, where toxic fumes are more than six times above the health guidelines. Also that month, the Chinese Environmental Protection Ministry revealed percent of Chinese children are exposed to polluted indoor air at home, while almost 13 percent do not have access to proper drinking water.

In February 2017, the European Commission sent final warnings to France, Germany, Italy, Spain and the United Kingdom for failing to address repeated breaches of air pollution limits for nitrogen dioxide. It found there were 28 air quality zones with repeated pollution breaches in Germany, 19 zones in France, 16 in the UK, 12 in Italy and three in Spain.

Later that month, a poll conducted by the Greater London Authority, the UK council led by London Mayor Sadiq Khan, revealed 88 percent of London residents saw air pollution in London as a major problem, with 72 demanding more action from the government.