Belgian Region Threatens to Hold Out Against EU-Canada Trade Deal 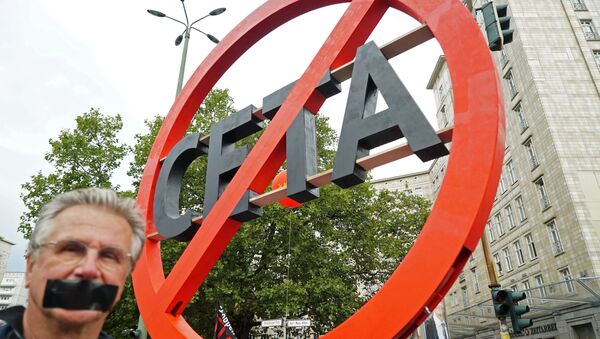 © Sputnik / Igor Zarembo
/
Go to the mediabank
Subscribe
International
India
Africa
Wallonia - the province of Belgium that held up the controversial CETA EU trade deal with Canada - has warned it may still not ratify the treaty - putting the whole deal in doubt, alongside the TTIP deal with the US that has hit the buffers since US President Donald Trump came to power.

The EU-Canada trade deal, known as the Comprehensive Economic and Trade Agreement (CETA) — although signed off by the European Council and the Parliament — still has to be ratified by all 28 member states, which includes all five regional parliaments in Belgium, as well as its federal parliament.

However, it floundered at the last minute — ahead of the formal agreement being signed, October 2016 — because Belgium was not able to ratify the deal, as one of its regional parliaments — Wallonia — objected.

The CETA deal is intended to remove customs duties, end restrictions on access to public contracts and open-up the services markets between Canada and the 28 EU member states. However, the Wallonian government — one of five regional assemblies that have to give the go-ahead to the deal for the federal government to sign up to it — opposed it on labor, consumer and environmental grounds.

It finally agreed to CETA, but only on the basis of further clarification from the European Court of Justice. However, Wallonian leader Paul Magnette said, March 7, there were differences of opinion on the way the matter is being dealt with.

​"Some want to restrict the questions when we want them as wide as possible," Magnette told reporters, threatening to hold back from signing the deal until the court issue had been settled.

Deal or No Deal?

As a result, the deal remains in limbo, bringing to a head the arguments over EU trade deals — including the Transatlantic Trade and Investment Partnership (TTIP) between the EU and the US and the Trade in Services Agreement (TiSA) between 23 members of the World Trade Organization and the EU.

All three trade deals are facing growing opposition — not least because of the controversial investor-state dispute settlement (ISDS) provisions which they all contain, in some shape or form.

For a trade deal to work, there have to be common standards on labor, environmental issues, food safety and many other issues.

​Once an agreement is in place, if a company is able to sell its products in its home territory, but is prevented from selling it in a partner country — because of conflicting regulatory conditions — then the company may invoke the ISDS provisions.

Critics say the "independent investment court system" under ISDS is separate from member states' own judicial systems and effectively creates a court system outside of them.