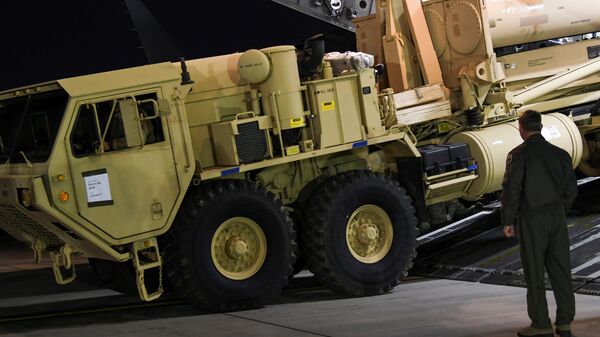 Davenport, Director for Nonproliferation Policy at the US-based Arms Control Association, mentioned two ways that the system developed in the 1990s could be bypassed.

The analyst expressed doubt that deploying THAAD is the smartest move for both Washington and Seoul since the measure will most likely further complicate the already tense relations of the two allies with China.

"And it certainly is not going to solve the North Korean nuclear and missile problem," she added.

Washington 'Needs Korean Conflict to Justify Its Military Presence' in Asia
North Korea has made headlines with its latest ballistic missile test by launching four ballistic missiles deployed to the Tongchang-ri region into the Sea of Japan on Monday. The missiles are said to have covered a distance of approximately 1,000 kilometers (620 miles), with three landing as close as 300 kilometers (190 miles) from Japan's coast.

The test took place days after the United States and South Korea kick-started massive military drills, known as Foal Eagle 2017. The war games were launched on March 1 and are expected to wrap up on April 30. Approximately 3,600 US troops were sent to South Korea, in addition to the 28,000 US service personnel already stationed in the country, to take part in the exercise.

"The timing of these tests is certainly not a surprise. The US and South Korea are currently involved in joint military exercises and North Korea always views this as a source of provocation. Responses like ballistic missile tests are certainly par for the course during these exercises," the analyst said. "I think we will see a lot of condemnation and likely a discussion of whether or not there can be additional sanctions that can be imposed on North Korea this time to try and continue to halt new developments in North Korea's missile program."

Davenport also suggested that the Trump administration has to reevaluate its policy towards North Korea and "really revise its approach."