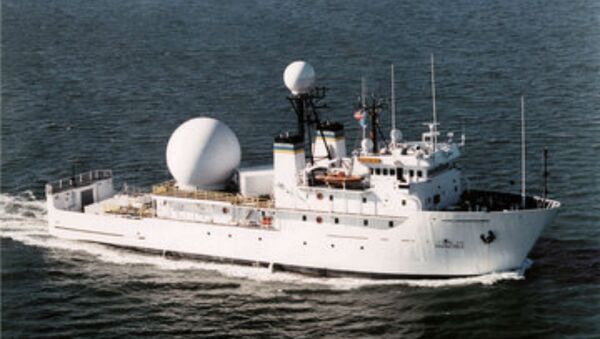 © Crowley Maritime Corporation
Subscribe
The USNS Invincible, escorted by the British Royal Navy, experienced a close encounter with high-speed attack ships deployed by the Iranian Revolutionary Guard, ultimately compelling the US spy ship and her formation to alter her course.

The Invincible, while transiting the Strait of Hormuz, which the US Energy Information Agency calls "the world’s most important oil chokepoint," was approached by "multiple" Iranian Revolutionary Guard (IRG) fast-attack ships. When the IRG ships were within 600 yards of the naval formation, they halted their advance, a US official said on Monday.

The Navy attempted to contact the IRG via radio to discuss their position, but received no response, the US official said, adding that it was an "unsafe and unprofessional interaction."

The Invincible is under the aegis of the the Military Sealift Command,  according to a War is Boring report, and is led by 18 civilian contractors manning the 224-foot, 2,285-ton vessel. While the white, mostly unmarked ship does not appear to have any formal weapons systems, hence the escort, it does carry a radar the US Air Force uses to collect intelligence. The Navy classifies the Invincible as a "Missile Range Instrumentation" ship which, according to the service, "monitors missile launches and collects data."

A CBS report indicated that Iran had sent a frigate that closed to within 150 yards of the spy ship while in the Gulf of Oman, just south of the Strait of Hormuz.