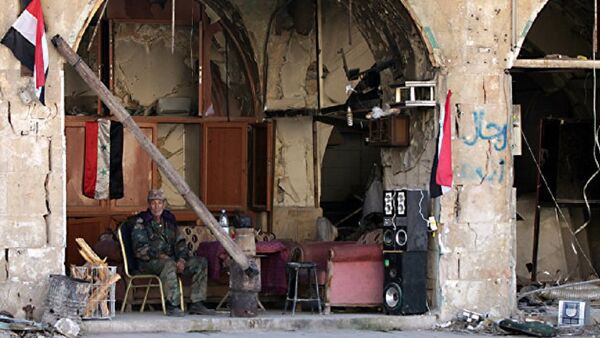 © AFP 2021 / Louai Beshara
Subscribe
Militants who fought against the Syrian army in Aleppo and later were pardoned by the government explained why they have switched their loyalties from working with terrorists to serving the Syrian army.

Syrian Army Drives Daesh From Strategic Areas Near Airbase in Aleppo Province
“They [the terrorists] promised to build us a just society but they only brought death and cruelty, they are crazy fanatics who know only one thing — to kill. The peaceful civilians do not support them, it's a myth,” Abdullah, one of the former militants who is now a soldier in the Syrian army, told Sputnik in an interview.

The ex-militants admit that they are laying down their arms and moving to the side of the regular army, despite death threats from former comrades-in-arms.

Some of the civilians joined the ranks of the militants not out of their own will; rather it was from despair, while others went because the fate of their family was at stake.

“I lived in eastern Aleppo and had nothing to feed my family, whereas, the militants had warehouses packed with western humanitarian aid but they only gave it out to the families of the militants. In order not to die of hunger, I joined their ranks,” Muhammad Ahmad Jasim said.

As soon as the offensive of the Syrian army began, he surrendered to the authorities.

All those militants who decide to lay down their arms are tested and receive consultation. Those who decide to join the ranks of the Syrian army receive the necessary ammunition.

The reconciliation process is maintained by the seniors together with the participation of the Russian center for Syrian reconciliation.

Syrian Army Gains Upper Hand in Aleppo Province After Clashes With Daesh
Syrian President Bashar Assad extended a decree on amnesty for militants who surrender and hand over their weapons until the end of June.

After liberating the eastern part of Aleppo, many militants who have agreed to lay down arms and leave the city were granted amnesty by Damascus.

000000
Popular comments
awesome. when this first started, even i fell for the propaganda. i remember vividly back home in the States, listening to the BBC humiliate President Assad, claiming he's frontin', pretending to be strong, and that sooner or later, he will fall. the media all joined this choir.. even i began to root for Assad's demise. But then i saw the light: it was another regime change attempt by the Evil Empire.