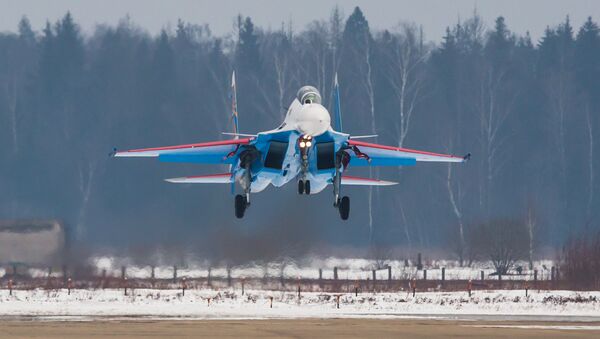 The "Russian Knights" aerobatic team will fly at the LIMA'17 Exhibition in Malaysia in March, 2017, according to Commander in Chief of the Russian Aerospace Forces Colonel-General Victor Bondarev.

MOSCOW (Sputnik) —  The flights in Malaysia will be the world premiere of the "Russian Knights" flying the new Su-30SM supermaneuverable multirole fighters.

New Su-30SM fighters were manufactured for the Russian Knights by Irkut Corporation in late 2016. Earlier, this aerobatic team operated Su-27 and Su-27UB fighters, since being established in 1991.

Colonel Andrei Alekseyev, the chief pilot of the Russian Knights, discloses that the team is working hard on the new flight demonstration program. "We train practically every day, weather permitting," he says.

The pilots of the aerobatic team are highly appreciative of the new fighters.

"Su-30SM is an excellent aircraft. Currently, we are in the process of mastering this fighter. There will be many new elements with the use of supermaneuverability in the individual aerobatics. We will also add something new to the group aerobatics," Colonel Alekseyev says.

He also says that the combat capabilities of the Su-30SM are much better than those of previous generation fighters. Unlike most other aerobatic teams in the world, the Russian Knights fly serial aircraft completely retaining their combat capabilities.

At the LIMA'17 exhibition in Malaysia, the Russian Knights will fly four Su-30SM aircraft.