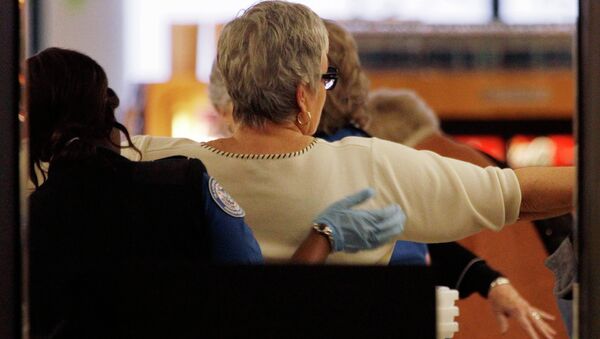 Grab ‘em by the pussy indeed: US airport security is simplifying its pat-down procedures, and things are about to get intimate.

Transportation Security Administration (TSA) agents have always had five pat-down options to choose from in frisking passengers who either requested a physical search or who triggered enhanced security measures. The options included frisking methods that weren't particularly invasive.

Now, following revelations that weapons are getting past them, those options are out the window. There's going to be one universal physical pat-down, and it's "comprehensive."

"I would say people who in the past would have gotten a pat-down that wasn't involved will notice that the [new] pat-down is more involved," TSA spokesman Bruce Anderson said March 3, Bloomberg reports.

It will involve more "intimate contact," TSA has acknowledged, though National Spokesman for TSA Michael England told Gizmodo, "The new protocol does not mandate the touching of passengers genitals." However, at least one passenger, writer Joel Stratte-McClure, called his experience with the new procedures at California's small Redding Airport, "increased scrutiny of the groin area."

"The TSA consolidated previous pat-down procedures into one standardize procedure at airport security checkpoints and at other locations within the airport. This standardized procedure continues to utilize enhanced security measures implemented several months ago, and does not involve any different areas of the body than were screened in the previous standard pat-down procedure," England told Gizmodo in a statement about the change.

The previous pat-down selection, in which individual agents could exercise choice based on risk-assessment, will be phased out over the next couple of weeks, starting with smaller airports. Officers of the same sex as a targeted traveler will still conduct the pat-downs, and while the agency insists the new screening procedure won't make security lines longer, "for the person who gets the pat down, it will slow them down," Anderson said.

Denver International Airport notified its staff and flight crews on March 2 that the "more rigorous" searches may indeed involve more contact than before, Bloomberg writes.

To be fair, more and more people seem to be trying to bring firearms onto planes. The agency seized 28% more weapons from passengers in 2016 than they did in 2015, and on February 23 they broke a new record, finding 21 firearms in a single day.

Bloomberg notes that the security change is partly a reaction to a 2015 Department of Homeland Security report that found the agency had failed to find weapons or explosives in 95% of trials.  As a result of that report, TSA will also be ending a policy of letting some travelers use special expedited security lanes during busy hours.