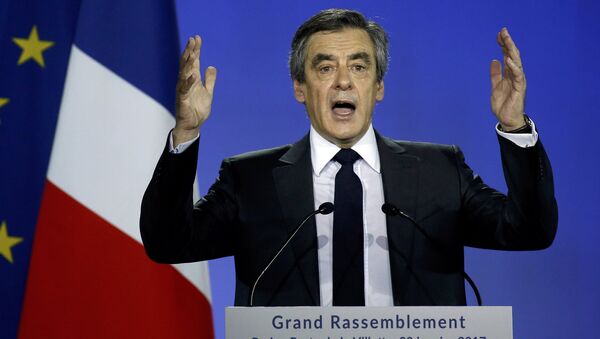 French presidential hopeful from The Republicans party Francois Fillon claimed on Sunday he would continue the presidential race, stressing that "no one has the power" to force him out.

Francois Fillon’s Wife Wants Him to Continue Presidential Race 'Until the End'
PARIS (Sputnik) — In an interview aired on the France 2 channel, Fillon rejected any possibility of withdrawing from the race amid the "penelopegate" scandal with his wife's fake employment.

"No… I was a democratically elected candidate, I gathered 1,500 elected representatives' signatures. No one has the power to make me quit the election, and I see no reason to withdraw my candidacy," Fillon stated.

He added that he hoped to convince his fellow party members that only his project had any chance of garnering sufficient support in the upcoming election.

The comments came after Fillon's supporters gathered in Paris in their thousands. The Republicans party has been looking into options for resolving the penelopegate scandal.

French Presidential Election: Poll Shows 71% of Voters Want Fillon to Quit Race
In January, an investigation was opened following media reports on Fillon employing his wife as his parliamentary assistant, for which she was allegedly paid without performing her duties. The employment by Fillon of his children was also questioned by the media.

The center-right candidate has repeatedly denied all accusations and pressed on with his election campaign despite a dip in popularity. His party has been pressed to look for alternatives for his candidacy, with his former primaries rivals among those rumored to be up for replacing him.

Fillon has called the media storm a "political assassination." He is expected to face investigators on March 15, after which formal charges may be made.

The first round of the French presidential election is scheduled for April 23, with the run-off set for May 7.