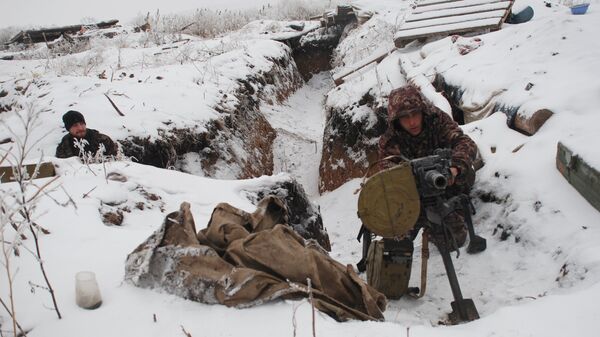 DONETSK (Sputnik) – He pointed out that the ceasefire regime was respected.

"Now the initiative on the ceasefire across the contact line since 11:00 a.m. [local time] works. That is our joint initiative with the LPR [Lugansk People’s Republic]. We proposed to stop shelling via representatives in the Joint Center for Control and Coordination [JCCC]," Basurin said.

"We will see whether Ukraine would manage to control radicals," Basurin added.

DPR Declares Blockade on Kiev as Donbass Republics 'Run Out of Patience'
Russian authorities have repeatedly voiced concern over the escalation. Kremlin spokesman Dmitry Peskov said earlier in February that Moscow had reliable data that the Ukrainian independent armed groups, supported by the Ukrainian Armed Forces' artillery, were behind the attack on Avdiivka.

Kiev launched a special military operation in Ukraine’s southeast in April 2014, after local residents refused to recognize new Ukrainian authorities, which had come to power as a result of what was recognized by many people as a coup.

In February 2015, a peace agreement was signed between Ukraine’s conflicting sides in the Belarusian capital of Minsk. Despite the fact that the deal stipulates a full ceasefire in Donbass, violations both on the part of Kiev forces and local militia have been reported.