Zakharova Warns US Ambassador About Risks of Talking to Russian Diplomats 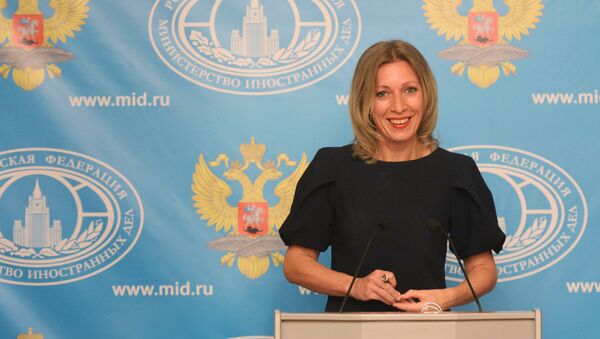 © Sputnik / Sergey Pyatakov
/
Go to the photo bank
Subscribe
Russian Foreign Ministry spokeswoman Maria Zakharova jokingly told US Ambassador to Russia John Tefft that he should refrain from meeting with Russian politicians and officials if he does not want to become the next victim of what US President Donald Trump has declared a “witch hunt.”

'If Trump Loses Sessions, It'll Be the End of His Administration'
Zakharova made it clear that she believes such meetings may not be safe for US officials, at a time when US media and lawmakers are busy ferreting out representatives of the new administration who may, or may not, have had contacts with Russia prior to Trump's victory in the 2016 presidential elections.

On Friday, the spokeswoman wrote on her Facebook page that earlier that day she had run into the US ambassador at the Foreign Ministry lobby, and humorously let Tefft know that he was acting in a careless fashion by not halting all contact with Russian diplomats, officials, and politicians.

"You're putting yourself in danger," she joked with Tefft, adding, "What if CNN finds out?"

Former CIA Chief: 'Russian Ambassador Kislyak is Veteran Diplomat, Not a Spy'
CNN recently reported, referencing anonymous US government officials, that US intelligence bodies viewed Russia's Ambassador to the US, Sergey Kislyak, as a "top spy" or "spy-recruiter," due to his alleged association with Russian secret services. The mainstream media outlet has not provided evidence to back up their accusations.

Speaking at a news briefing Thursday, Zakharova condemned the reports as misleading public opinion, in the US and in the world, and calling it "media vandalism."

"Is it the rock bottom, which the Western media hit," she asked, "or is there still somewhere to go?"

"I will reveal a military secret: diplomats are working, and their work consists of making contacts in the host nation."

In February, US National Security Adviser Michael Flynn resigned, amid media questioning of his concealing alleged ties to Kislyak, with whom he was reported to have discussed sanctions against Russia, a claim that Deputy Foreign Minister Ryabkov later denied.

000000
Popular comments
If I was Russia, I would close down the US Embassy. There again, it might come in handy, when you see who goes and who comes out.
anne00marie
4 March 2017, 04:41 GMT3
000000
Flynn is now even deeper in the intel world under Trump... first of all, he is a valuable asset in that realm... second, he did NOTHING out of the ordinary... third, Democrats are pussies and wear their emotions on their sleeves... "waaaaaaahhhhh, my butt hurts" is the favorite line they seem to exhibit