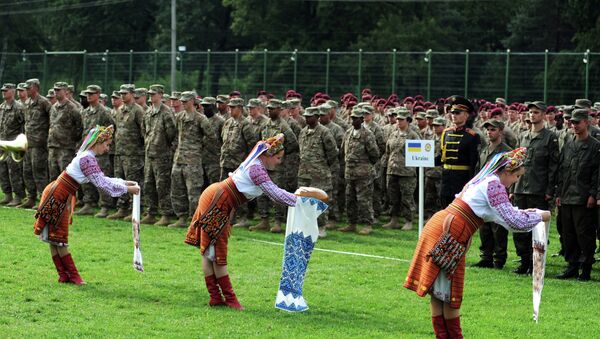 © AFP 2021 / YURIY DYACHYSHYN
Subscribe
The Committee on Appropriations of the House of Representatives of the US Congress has drafted a bill to cut US military aid to Ukraine to just $150 million, which is less than half of the $350 million Kiev received from Washington in 2016.

Under the proposed bill, the Pentagon can spend funds “for training, equipment, weapons of a defensive nature, logistics, and intelligence.”

Washington ignores Kiev’s persistent calls for the supply of offensive weapons for its “counterterrorism operation” in Donbass.

Finally Lost Hope? No One in Europe, US 'Ready to Die for Ukraine'
In April 2016 Washington’s UN envoy Samantha Power said that a military solution to the crisis in eastern Ukraine would spell disaster for all.

“A lot more people would suffer,” she warned.

As a result, Kiev’s military had to make do with army pensioned off Army jeeps, night vision gear, bullet-proof jackets and military instructors.

Still, during the closing months of his presidency, Barack Obama decided to build up US military assistance to Ukraine.

“We will increase our military support for Ukraine,” Obama said during the July 2015 NATO summit in Poland.

In January 2017, Ukrainian Foreign Minister Pavlo Klimkin stated the need for “more high-tech lethal defensive weapons” from the US.

If the bill proposed by the Committee on Appropriations receives Congressional approval, it would dash Kiev’s hopes for a military solution to the conflict in Donbass.

The scope of the US assistance to Kiev pales in comparison with the billions of dollars Washington provides for Israel and its other allies worldwide.

In addition to the billions of dollars it allocates to Israel each year, Washington has spent $60 billion to rebuild the war-devastated infrastructure in Iraq and keeps supplying Baghdad with weapons even after the US military contingent left the country in 2011.

Following the Daesh invasion, the Pentagon ramped up its military supplies to Baghdad with 1,500 AGM-114 Hellfire missiles, as many  Humvee armed vehicles, 250 Caiman APC’s and hundreds of M1A1M Abrams tanks and Stryker armored vehicles and dozens of F16 fighter jets.

Egypt is another major recipient of US military aid. In 2015 Barack Obama said he would ask Congress to allocate $1.3 billion in military supplies to Cairo.

Washington uses military assistance as a means of political influence to keep its military-political alliances in place.

The Western sanctions against Russia imposed under pressure from Washington have already cost the US and its European allies an estimated $100 billion.

Laskavo Prosimo! Poroshenko Invites US Vice President Pence to Visit Ukraine
Realizing the dangerous consequence serious Western military support to Kiev could lead to, especially in view of the political instability in Ukraine and the trigger-happy rhetoric used by many of its politicians, President Donald Trump is backing off from the “shared values” principle underlying the previous administration’s support for NATO’s eastward expansion.

“Guided by this “shared values” principle, the Americans were moving east trying to get more and more countries embrace their ideology. The new administration does not share this strategy, especially when it comes to Ukraine, a country which is unable to control itself,” political scientist Boris Mezhuyev told RT.

He added that any further Western support for Kiev is fraught with a protracted confrontation with Russia.

“In the long run, Ukraine will realize the downsides of its stupid and short-lived confrontation with Russia and will start gravitating back into Moscow’s fold,” he noted.

Moscow-based military expert Viktor Litovkin said that Washington never had any serious plans regarding Ukraine because “the Americans realize full well that Ukraine cannot be separated from Russia.”

“The Americans see Ukraine just as a means of trolling Russia. They will keep it in a state of limbo without spending too much just to make sure it is alive,” he emphasized.

000000
Popular comments
Another mess created by the morons that run the terrorist American government. No plan these idiots have made has ever worked out. They lack focus, critical thinking and a grasp of history. They are poster children of the failed American education system. These idiots likely think they can roll over Iran in a week and then be playing golf. They are clueless.
Mitach2002
4 March 2017, 15:04 GMT1
000000
Well, they assisted the Jews in setting it up so I guess they thought they were obligated to fund the destruction. What a disgusting episode.
LoPhatt
5 March 2017, 01:31 GMT
000000
Newsfeed
0
New firstOld first
loader
LIVE
Заголовок открываемого материала
Access to the chat has been blocked for violating the rules . You will be able to participate again through:∞. If you do not agree with the blocking, please use the feedback form
The discussion is closed. You can participate in the discussion within 24 hours after the publication of the article.
To participate in the discussion
log in or register
loader
Chats
Заголовок открываемого материала
Worldwide
InternationalEnglishEnglishMundoEspañolSpanish
Europe
DeutschlandDeutschGermanFranceFrançaisFrenchΕλλάδαΕλληνικάGreekItaliaItalianoItalianČeská republikaČeštinaCzechPolskaPolskiPolishСрбиjаСрпскиSerbianLatvijaLatviešuLatvianLietuvaLietuviųLithuanianMoldovaMoldoveneascăMoldavianБеларусьБеларускiBelarusian
Transcaucasia
ԱրմենիաՀայերենArmenianАҧсныАҧсышәалаAbkhazХуссар ИрыстонИронауОssetianსაქართველოქართულიGeorgianAzərbaycanАzərbaycancaAzerbaijani
Middle East
Sputnik عربيArabicArabicTürkiyeTürkçeTurkishSputnik ایرانPersianPersianSputnik افغانستانDariDari
Central Asia
ҚазақстанҚазақ тіліKazakhКыргызстанКыргызчаKyrgyzOʻzbekistonЎзбекчаUzbekТоҷикистонТоҷикӣTajik
East & Southeast Asia
Việt NamTiếng ViệtVietnamese日本日本語Japanese中国中文Chinese
South America
BrasilPortuguêsPortuguese
NewsfeedBreaking
08:41 GMTI Ain't the Sharpest Tool in the Shed: MGK Stabbed Himself While Trying to Impress Meghan Fox
07:54 GMTCristiano Ronaldo May Miss Manchester United's First Game Under New Boss Ralf Rangnick
07:40 GMTUK Government Reportedly Considering Criminalising Public Sexual Harassment of Women
07:34 GMTParents of Suspected Michigan Shooter Detained in Detroit
07:24 GMTUK Gov't Reportedly Considers Changing Law on Free Speech After Meghan Markle's Victory Against ANL
07:22 GMTFrench Foreign Ministry Says Evacuated Over 300 People From Afghanistan
07:13 GMTNuclear Deal Talks With Iran in Vienna to Resume Next Week, Russian Envoy Says
06:06 GMTCOVID Live Updates: Mexico Confirms Its First Case of Omicron Variant
06:02 GMT'Johnson's Not Above the Law': Labour Asks Police to Probe Alleged No 10 Parties Amid 2020 Lockdown
05:28 GMT'People's Republic of Comedy': Lithuanian MP Blasts China Amid Taiwan Spat
04:01 GMTTwitter Admits to Erroneously Suspending Accounts Amid a Slew of 'Coordinated and Malicious' Reports
03:41 GMTWorld Must Not Blame Africa for Undervaccination While Denying Continent Shots - Expert
03:32 GMTUS Intel Accuses Russia of Planning 'Multi-Front Offensive' Against Ukraine as Early as 2022
03:30 GMTMeet Mehmet: Dr. Oz Vying for US Senate in Pennsylvania After Trump-Endorsed Candidate Drops Out
01:45 GMTIsraeli ‘Pegasus’ Spyware Used to Hack Phones of 11 US Diplomats - Reports
01:35 GMTColorado Store Shooting Suspect Found Incompetent to Stand Trial - Reports
00:59 GMTAstronomers Spot Ultra-Dense Exoplanet Seemingly Made of Solid Iron Orbiting Nearby Star
00:41 GMTMillions Remain Long-Term Unemployed Despite Big Decline in November US Jobless Rate
00:30 GMTA Failed Biennial World Cup Could Lead to New Global Tournament
YesterdayJan. 6 Panel Postpones Jeffrey Clark Deposition Over Medical Condition