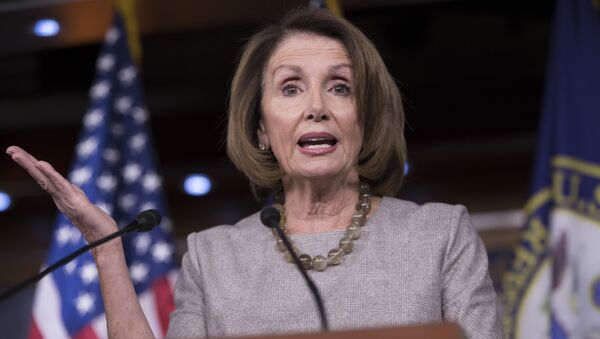 © AP Photo / J. Scott Applewhite
Subscribe
US House of Representatives Minority Leader Nancy Pelosi said she met with Russian Ambassador Sergey Kislyak openly and in the presence of the media, responding to US President Donald Trump's demand of the probe into Pelosi Russian ties.

MOSCOW (Sputnik) — On Friday, Trump said on Twitter that Pelosi, who urged for the resignation of Attorney General Jeff Sessions over his previously undisclosed contacts with Kislyak, had to be investigated for "her close ties to Russia, and lying about it" and added a link to a photo of Pelosi and other US and Russian lawmakers.

I hereby demand a second investigation, after Schumer, of Pelosi for her close ties to Russia, and lying about it. https://t.co/qCDljfF3wN

​According to Politico outlet, the photograph of Pelosi, Kislyak and several other politicians was taken in 2010 at a meeting with then Russian President Dmitry Medvedev. However, Pelosi told the outlet that she had never met Kislyak.

On Thursday, Sessions recused himself from the ongoing investigation into Russian alleged interference in the 2016 US presidential election, after the Washington Post newspaper reported that Sessions held two meetings with Kislyak, despite denying contacts with Russian officials at his confirmation hearing.

In February, US National Security Adviser Michael Flynn announced his resignation after media reports, based on leaked information, that he had misled the Trump administration about the extent of his talks with Russian officials.

In January, the Office of the Director of National Intelligence (ODNI) released a report saying US intelligence agencies had a high degree of confidence that Russia meddled in the US presidential election, but did not offer any evidence.

Russian Foreign Minister Sergey Lavrov said at the Munich Security Conference in February that there were "no facts, just accusations" on Moscow's alleged hacking of the Democratic Party websites. On Friday, the Russian foreign minister said that the scandal around Kislyak's contacts with the US administration officials during the presidential campaign looked like a witch hunt.

The Kremlin has repeatedly denied allegations that it had helped sway the US voters in Trump's favor, calling these accusations absurd. Trump has also denounced the allegations.