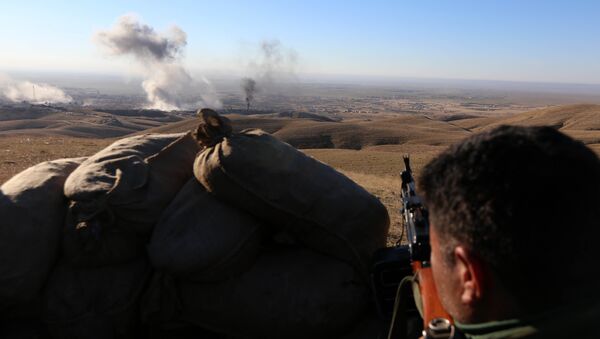 MOSCOW (Sputnik) – The reporter was wounded while covering clashes between the so-called Rojava Peshmerga forces and the Yazidi Shingal Resistance Units (YBS).

"Erhan underwent surgery. Currently, she is in serious condition," RojNews said on Friday, adding that the journalist was injured in her head.

On Friday, the Rojava Peshmerga group attacked forces of the Yazidi Shingal Resistance Units (YBS) in the town of Knanesor, located in the northwestern Iraqi Shingal (Sinjar) area.

People of Shingal fought back, trying to stop the Rojava Peshmergas, and the local Yazidi Peshmerga forces were reportedly fighting the attackers as well.

Between Two Stools: US Won't Abandon Either Syrian Kurds or Turkey
The Rojava Peshmerga group is a paramilitary wing of the Kurdish National Council, supported by the Sinjar region’s ruling Kurdistan Democratic Party (KDP). The YBS armed group is allegedly loyal to the Kurdistan Workers Party (PKK), outlawed in Turkey.

Sinjar was fully liberated from Daesh, a terrorist group outlawed in Russia and many other countries, by Kurdish-led forces in November 2015. Daesh captured Sinjar in August 2014, during the terrorists' second northern Iraq offensive.

The Kurds comprise ancient tribal groups, which are currently living in parts of Turkey, Iran, Iraq and Syria. Kurdistan is an autonomous region of Iraq. Its status is formalized in the country’s constitution.