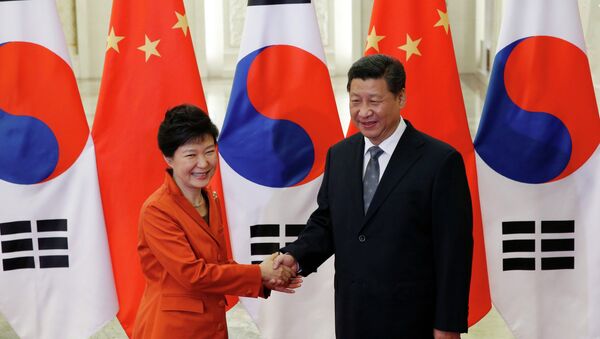 © REUTERS / Kim Kyung-Hoon
Subscribe
International
India
Africa
China’s tourism authority has warned citizens against traveling to South Korea, after over 100 Chinese tourists were detained in a South Korean airport, some for as long as five days. This comes amid serious friction between the two Asian nations over the issue of South Korea’s new missile defense system.

The China National Tourism Administration (CNTA) warned that those interested in visiting The Land of the Morning Calm to "seriously and fully study South Korea's entry policy before traveling." It also mentioned that travelers should carefully and cautiously choose destinations.

Jeju is the largest island among the hundreds that are part of South Korea, and has become a popular destination for Chinese tourists in recent years. The island's popularity with Chinese travelers is in no small part because of Jeju Island's visa-free policy for Chinese tourists. It is a sticky situation. The Chinese tourists are an integral part of the island's economy but have also caused a notable uptick in crime after the no-visa policy was implemented in 2008.

In October 2016, Jeju Island denied entrance to over 100 Chinese tourists, detaining them at the airport. There was no reason stated for these denials of entry, except perhaps to alleviate increasing tensions between Chinese tourists and Jeju locals.

The detained tourists are not the only point of contention between China and South Korea. The installation of a US-made missile-defense system, the Terminal High Altitude Area Defense (THAAD), outside of Seoul, led to Beijing's allegations that South Korea could use the radar system to spy on Chinese military activity for the Americans. South Korea insists that the system's sole purpose is to defend it from aggression from rival nation North Korea.

South Korean media reported that China intended to ban travel to South Korea in protest, an allegation that Chinese agencies denied. Some travel service providers, including Tongcheng, Tuniu, and Ctrip have removed their South Korean travel services, while others, like Mafengwo and Tmall, remain in business.

On Friday, Chinese Foreign Ministry spokesman Geng Shuang issued a statement reaffirming friendship with South Korea. However, he also said that "instead of chasing shadows that don't exist, we hope the South Korean side will heed the voice of the people and take concrete actions to avoid causing further damage to bilateral relations."

In 2016, about 47 percent of all tourists to South Korea were from China. A travel ban would wreak havoc with South Korea's tourism sector, making the threat of sanctions increasingly dire. "It is a really terrible and worrying situation here," said one Korean duty-free retailer to The Moodie Davitt Report.

Beijing has also restricted South Korean TV shows and films which are wildly popular in China.