A Tough Job to Deal With? Who Will Be New US Ambassador to Russia 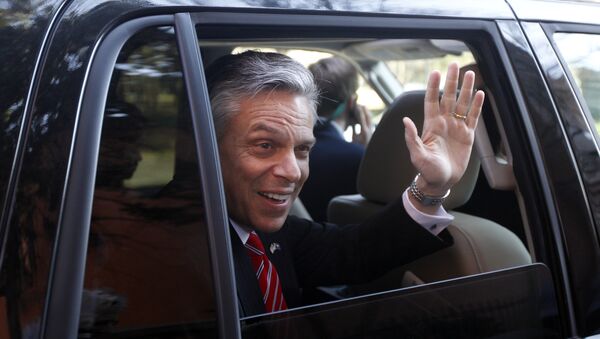 'No Political Experience': Why Wilbur Ross Became US Secretary of Commerce
Earlier this week, the US media reported that the White House is considering former Utah governor and ambassador to China Jon Huntsman to become next US ambassador to Russia.

A senior official in the Trump administration told CNN that the White House is still discussing the position with Huntsman, who served as Governor of the US state of Utah between 2005 and 2009.

"The Huntsman family has had its own business ties in Russia since the fall of the Soviet Union, and Huntsman International LLC operates six businesses in the country, including plants creating pigments and polyurethanes," according to the newspaper.

The Salt Lake Tribune described the post of US Ambassador in Moscow as "one of the most challenging foreign policy roles," given that the US Congress is due to open a probe in Russia's alleged role in the 2016 US presidential election.

Some items from Huntsman's biography can shed more light on the person who has been tapped to become the new US Ambassador to Russia.

Meet Steve Bannon, One of the Most Influential Members of the Trump Team
Huntsman was born on March 26, 1960, in Palo Alto, California, the eldest of nine siblings. At the age of 15, he became an Eagle Scout while attending Highland High School in Salt Lake City.

He then decided to quit high school in order to pursue a musical career as a keyboard player in the rock band Wizard. He later obtained a G.E.D. and was admitted to the University of Utah, and served as a Mormon missionary in Taiwan for two years.

Shortly after, Huntsman transferred to the University of Pennsylvania, where he graduated with a degree in international politics in 1987.
Notably, Huntsman's career includes work in the administrations of five US Presidents. At the age of 32, he became the youngest US Ambassador in 100 years, heading the diplomatic mission in Singapore.

In 2004, Huntsman won the gubernatorial election in Utah, and four years later, then-US President Barack Obama appointed him to the post of US Ambassador to China.

Jon Huntsman is in talks to be the ambassador to Russia. Looks like he’ll have plenty of help from everyone else in the administration.

In the 2012 elections, he ran for the US Presidency, but failed in the Republican Party primaries; he then endorsed fellow Mormon Mitt Romney, a distant relative, who eventually lost the election to incumbent Democrat Barack Obama.

During the 2016 presidential polls, Huntsman first supported Donald Trump's candidacy, but later, after the "sexist" scandal, joined Trump's critics, urging his party members to give a voice to Michael Pence.

Huntsman in talks to serve as US ambassador to Russia: report https://t.co/hg0tnbua70 pic.twitter.com/XTKUxH906K

Touching upon Huntsman's current stance on Russia, Vladimir Ardayev quoted the Salt Lake Tribune as saying that during his election campaign speeches in 2012, Huntsman expressed his rather skeptical attitude towards Moscow.

The Trump Team's First Loss: Who Was Behind Flynn's Resignation
"During his short-lived bid for the presidency in 2012, Huntsman said Obama's effort to reset relations with Russia is like a 'Potemkin village in which we pretend the Kremlin is more of a partner than it is, more of a democracy than it is, more respectful of human rights than it is, and less threatening to its neighbors than it is,'" the newspaper said.

While calling for Washington's cooperation with Russia in the arms control sector, Huntsman said that the US-Russian relations should be viewed "with more objective eyes," according to the newspaper.

"Taking all this into account, as well as the fact that Huntsman served the US Ambassador to China, seen by American diplomats as a difficult country, it is safe to assume the style of his work as the new American Ambassador in Moscow will be significantly different from his predecessors," Ardayev said, referring to Michael McFaul's openness and John Tefft's hardline stance.

Most likely, in the person of Jon Huntsman, Moscow will have to deal with a cautious and distrustful American diplomacy, Ardayev said, adding that President Donald Trump's "policy of deals" may make amendments to Huntsman's work style.

000000
Popular comments
Just about anyone can be the US ambassador to Russia, whomever it is though, is not allowed to talk to Russians.