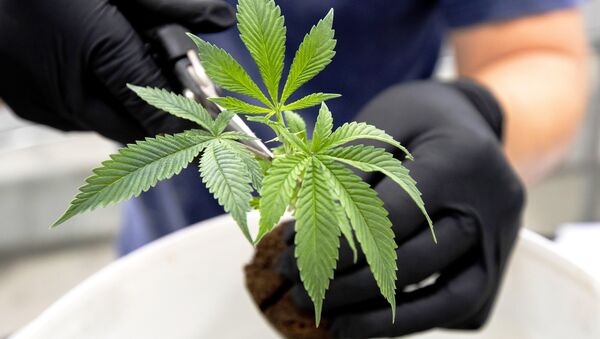 © Photo : Lars Hagberg
Subscribe
The owner of Med-West, a medical-marijuana producer raided last year by police, is seeking the return of over $100,000 in cash that was seized from him and his family.

Within a matter of hours, cops confiscated most of the company's inventory, products, and more than $300,000 in cash. Police also arrested two employees working on that day, but they were soon released.

Days later, the San Diego County district attorney's office froze the personal bank accounts of Slatic, his wife, and two stepdaughters, as part of a legal maneuver known as civil asset forfeiture, which allows law enforcement to seize cash and property, even if they only suspect that the assets are tied to criminal activity.

Big Bong Theory: Danish Epileptics Ready for Cannabis Relief
Slatic, along with the public interest law firm Institute for Justice, has challenged what he claims was an illegal government seizure. More than a year has passed, and police have not arrested or charged the San Diego entrepreneur with any crime.

Slatic's lawyer, Wesley Hottot, has requested the return of some $100,000 seized from family bank accounts, citing the one-year statute of limitations for prosecutors to file charges.

"In this case, the limitations period began to run no later than Feb. 2, 2016 — the date on which the court issued freezing orders that prevented the Slatics from accessing their accounts," a motion filed Monday states.

Tanya Sierra, a spokeswoman for District Attorney Bonnie Dumanis, insists that even though a search warrant to freeze the bank accounts was issued in February 2016, the funds were not formally seized until June, when Superior Court Judge Jay M. Bloom signed the order to transfer the accounts to the DA.

"We believe it is the seizure that starts the clock and not the freeze order," Sierra said.

Slatic and his lawyers first sought to recover the seized money in November 2016, ten months after the raid, but Judge Bloom denied the release of the cash.

At that hearing, the judge did observe that "the Court does have some concern with the fact that the People have kept money for nearly 10 months without filing a case."

A final decision on whether the money will be returned is expected on March 22.

Slatic's medical marijuana business was shut down after the raid, and 35 local residents employed at the legal facility lost their livelihoods. The entrepreneur pointed out that Med-West complied with all state medical-marijuana laws, was licensed by the city of San Diego, and paid taxes to the IRS, as well as to state and local governments.