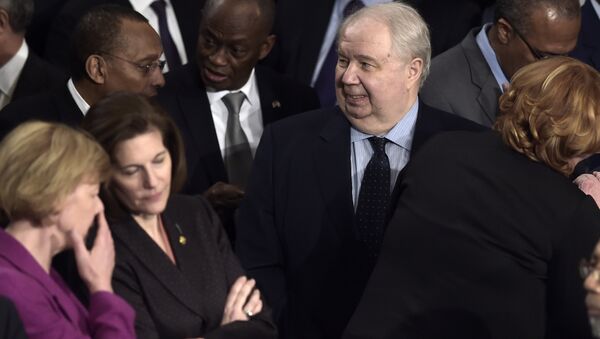 As US media and lawmakers continue to valiantly ferret out members of the Trump administration who may or may not have had contacts with Russian Diplomats, the popularity of Russia’s ambassador to the United States Sergey Kislyak continues to soar.

Who Could Be the Next Victim of the 'Witch Hunt' in the US, and Why
Earlier in February, US National Security Adviser Michael Flynn resigned amid media questioning over his alleged ties to Kislyak, with whom he has allegedly discussed anti-Russian sanctions.

The next victim of what US President Donald Trump has already declared a “total witch hunt” became Attorney General Jeff Sessions who was accused of lying about his contacts with Russia's ambassador to the US Sergey Kislyak during his confirmation hearing. These accusations forced Sessions to remove himself from any current or future investigations related to Donald Trump's election campaign and Russia's alleged involvement.

To its credit, the American public took this wave of accusations with a grain of salt. And while some US media agencies now set their eyes on Trump’s senior advisor Jared Kushner and former campaign adviser Carter Page, social media users instead turn their attention towards ‘the man of the hour’ – Russian ambassador to the US Sergey Kislyak.

Some netizens openly joked about this whole situation.

This from 2016: Americans wait patiently to meet #Kislyak. pic.twitter.com/Y1dRZZ3uVn

@colbertlateshow Do we know Kislyak doesn't work for MIB? Everyone keeps forgetting they meet him. pic.twitter.com/cIOKgWV4Qp

I had to. Don't know the provenance however whoever you are, thank you. X, sj

Others snidely remarked that Kislyak met with members of the Democratic Party as well.

The last time I was in the Senate dining room, Feinstein was having lunch with the Russsian amb. I never gave it a second thought. https://t.co/azR0M5LrkK

Meanwhile, some people quietly wondered why Kislyak had apparently met with everybody but them.

How come Sergey Kislyak didn't meet with me……😭

"As I arrived at the Foreign Ministry I ran into US ambassador John Tefft. ‘You’re putting yourself in danger; what would happen if CNN were to learn about your contacts with Russian diplomats,’ I said while wishing him a good morning," Zakharova wrote on her Facebook page.