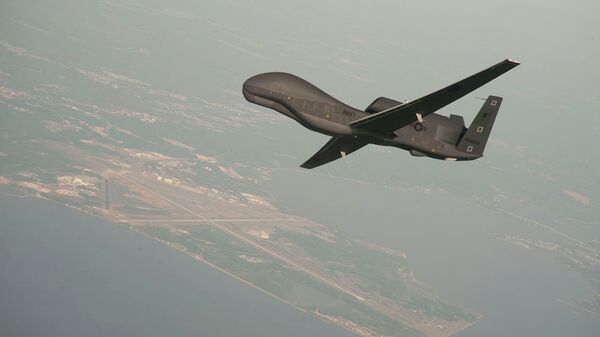 A drone strike near the Afghanistan-Pakistan border has resulted in two deaths. A local village elder suspects the strike came courtesy of none other than the United States, which would make it the first drone attack in Pakistan since Donald Trump became US president.

Two men riding a motorcycle in Pakistan’s Kurram Agency, a northern Pakistani province, were killed on Tuesday by a missile launched from a drone. The Kurram Agency is considered lawless, allowing the Taliban and and al Qaeda factions to find a safe haven away from government watch. The Embassy of the Islamic Republic of Pakistan in Washington DC could not be reached for comment or confirmation regarding where the attacks originated.

"A drone missile struck the motorcycle which caught on fire and then exploded," Haji Zamin Hussain said, a local elder.

Pakistani Journalist Sues US Over Drone Strike Deaths Of His Family

Under the administration of Barack Obama, a total of 563 strikes, resulting in the deaths of an estimated 384-807 civilians in Pakistan, Somalia and Yemen, were authorized, according to a report from the Bureau of Investigative Journalism (BIJ). In what almost constituted a mockery of media coverage, the Obama administration insisted that the strikes were "exceptionally surgical" and "precise" in killing terrorists, without placing "innocent men, women and children in danger," the BIJ noted. The Obama administration tried covering how many innocent civilians had been killed by CIA drone strikes, stating that an estimated 64 to 116 citizens had been killed, a figure about six-times lower than the real number.

In continuing the 16-year War on Terror, Trump said in a December 2, 2016, interview on Fox and Friends, "I would knock the hell out of ISIS." Trump was then asked about potential civilian casualties, to which he said, "I would do my absolute best" to limit noncombatant deaths, before abruptly interjecting, "the other thing is, you have to take out their families," referring to the families of suspected terrorists.

According to a New York Times report, the use of drone strikes has been given leeway to target wide swaths of people in faraway lands under adjusted rules of engagement. The Nobel Peace Prize-winning president instituted a policy that "in effect counts all military-age males in a strike zone as combatants, according to several administration officials, unless there is explicit intelligence posthumously proving them innocent."

The killing of civilians has become routine to the point that Obama’s favorite weapon will now be the subject of an annual, business-as-usual, report compiled by the Director of National Intelligence, formerly led by the one and only James Clapper, who lied to the US Senate about NSA espionage conducted against US citizens. According to an Obama-era report on the "legal and policy framework" of drone strikes, the DNI is directed to “release publicly an annual summary of information..about the assessed range of combatant and noncombatant deaths” produced by drone strikes.

At the 2016 White House Correspondents’ Association dinner, comedian Larry Wilmore likened Obama’s foreign policy to NBA sharpshooter Steph Curry, who tops the record books for the most 3-pointers made in one season, with 402. "It looks like you’re really enjoying your last year of the presidency. Saw you hanging out with players like Steph Curry, Golden State Warriors. That was cool. That was cool, yeah. You know, it kind of makes sense, too, because both of you like raining down bombs on people from long distances, right?"

Ian Bremmer, a geopolitics expert, discussed the use of drone strikes in international affairs as part of a ‘moneyball’ foreign policy, given the relatively low cost-per-engagement of using drones in addition to drones’ lower cost-per-flight-hour, in comparison to conventional air force jets and bombers. If Trump brings this moneyball approach to foreign policy the way Obama did, these two deaths may be just a blip on the radar of a much larger war campaign under the banner of the $4 to $6 trillion War On Terror, which, according to generals, remains at a "stalemate."