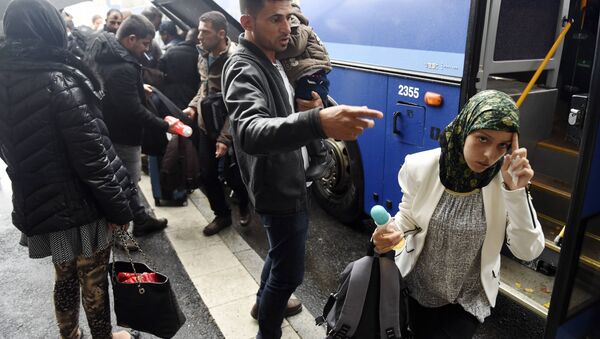 © AP Photo / Jussi Nukari/Lehtikuva
Subscribe
In 2015, when the migrant crisis was at its peak, Sweden saw hundreds of asylum seekers streaming over its border with Finland on a daily basis. Today, a reverse trend has manifested itself, as refused asylum seekers are returning to Sweden to try their luck elsewhere in Northern Europe.

Desperate Refugee Kids' Online 'Suicide Pacts' Startle Sweden
Swedish Police have expanded their internal immigration controls in the border town of Haparanda to handle the increasing current of asylum seekers who had their applications denied in Finland. Recent figures amount to about 50 people a week.

"People who have been denied asylum in Finland have chosen to travel back across the border to Sweden. The purpose of these internal immigration controls is to check whether they have legal grounds to stay in the country or if they want to seek asylum," police communications officer Kristina Lantto told Swedish Radio, refusing to comment on the reason that compelled the asylum seekers to travel to Sweden or their nationality.

Even if these figures are no match for the peak days of 2015, when up to a thousand asylum seekers arrived in the Finnish border town of Tornio from Sweden, Lantto proceeded to crush the asylum seekers' high hopes. According to her, these people will almost certainly be rejected in Sweden as well, having already been denied asylum in Finland. Thereupon, they will be taken into custody by the Migration Board in Gävle pending deportation, Lantto pointed out.

War Criminals, Terrorists Slipping by Overloaded Swedish Migration Board
Recently, the rise in denials issued by Finnish immigration authorities was reported to have caused a rise in self-harm attempts among rejected asylum seekers, which are becoming "somewhat commonplace." In the fall of 2016, Finland began implementing so-called "forced returns." So far, 300 reception center inmates have received such decisions, and more are to follow.

In 2016, Finnish reception centers experienced 58 suicide attempts by asylum seekers, with already 10 cases this year, prompting Pekka Nuutinen of the Finnish Migration Board (Migri) to describe the atmosphere at reception centers as "rather bleak." Last week, two unrelated cases of asylum seekers jumping out of the window were reported, Finish national broadcaster Yle reported.

The influx of asylum seekers prompted a "re-evaluation of criteria" for granting asylum and humanitarian protection, which was in effect a toughening of the rules. Iraqis, Afghans and Somalis thus faced stringent rules as their applications were rejected.

Migrants to Put Norwegian Welfare Under Stress, Outnumber Norwegians Soon
In the face of future rejections, asylum seekers from Iraq and Afghanistan have been arranging lasting protests against Finland's tough immigration policy, citing "significant flaws" in the processing of their applications.

Incidentally, they were backed by Finnish academic circles, which earlier this week presented a petition signed by a number of educators. In their statement, the authors slammed Migri's harsh rhetoric and "inhumane" treatment of refused asylum seekers and urged them not to overlook the humanitarian aspects.

In 2015, some 32,000 people applied for asylum in Finland, of which a great share arrived via northern Sweden. For comparison's sake, 55,472 children were born in Finland that year, according to Statistics Finland. Incidentally, this constituted a nearly ten-fold increase on the 3,651 applications received in 2014. In 2016, the corresponding figure was 5,657.