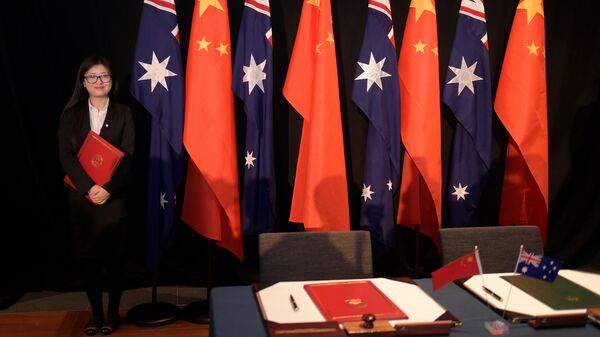 © AFP 2023 / LUKAS COCH / POOL
Subscribe
International
India
Africa
Australia is rightly concerned about the possibility of a trade war between China and the US, given its economic dependence on Chinese trade, Wang Zhimin of China's Institute of Foreign Economy and Trade and Yuri Rubinsky of the Russian Academy of Sciences told Sputnik.

Asia
Boeing to Replace Acoustic Tech Units on Australian Navy Poseidon Aircraft
Australian trade minister Steven Ciobo led a business delegation to China last week, where he warned that a trade war between the United States and China would pose a threat to the global economy.

Ciobo referred to the speech Chinese President Xi Jinping made in January at the World Economic Forum in Davos. In it, Xi pledged commitment to global free trade and investment and the liberalization of trade barriers.

China is Australia's largest trading partner and two-way trade between the two countries is worth more than A$150 billion (US$113 billion) annually, according to Australian government statistics.

The Australian government hailed the "historic agreement with our biggest trading partner," which will support future economic growth, job creation and higher living standards through increased goods and services trade, and investment."

Is Trump Planning to Use Military Force Against North Korea?
Chinese tourists are also a valuable source of income for Australia. In recent years the number of Chinese visitors to Australia has increased by 10-15 percent annually and they are expected to provide A$13 million of income to the Australian tourist industry by 2020.

Although China is Australia's most important trading partner, Canberra is a political ally of Washington, which sought to exclude China from the now-defunct Trans-Pacific Partnership (TPP) free trade deal.

As well as ditching TPP, new US President Donald Trump has slammed Chinese economic policy and threatened to put higher tariffs on goods from China and other nations such as Germany and Mexico which he feels enjoy an unfair trade advantage.

Yuri Rubinsky of the Russian Academy of Sciences' Institute of Europe told Sputnik that Australia has to maintain a balancing act given its geographic and economic associations with China.

"Geographically and economically Australia is in the Asia-Pacific region, so choosing any one side between China and the United States is quite obviously suicidal. The economic well-being of Australia in the present and future requires broad ties with the West and the East, with a rising China in the first instance. China has become its largest trading partner. Coal, gas, food – the loss of steadily growing exports to China in these areas will be a major blow to the Australian economy. Australia has become more focused on China after the establishment of the free trade zone in 2015," Rubinsky said.

Wang Zhimin of the Center for Globalization and Modernization at China's Institute of Foreign Economy and Trade told Sputnik that the prospect of increased protectionism on the part of the US is viewed anxiously in Canberra as well as in Beijing.

Beijing Sortie Through South China Sea Scares Taiwan; Japan Scrambles Jets
"I agree with the Australian Trade Minister: a trade war between China and the United States is bound to threaten the global economy and have an impact on China-Australia trade relations. In fact, right now, China attaches great importance to the development of trade, foreign investment and attracting foreign capital," Zhimin said.

"It is worth noting the particular characteristics of the relationship between China and Australia. China has been Australia's biggest trading partner for many years. At the same time, Australia is a firm US ally. Australia is guided by a diplomatic principle of 'China is the economic support, the US is the political one.' This policy leads to difficulties in Sino-Australian relations."

"As a US ally, Australia supports closer cooperation with them in the military sphere. China is wary of the stationing of a US Marine base in Australia and the establishment, together with the US, Japan and South Korea of a so-called 'anti-Chinese encirclement.'"

In recent years, the Australian government has backed US criticism of China. For example, Australian Foreign Minister Julie Bishop has criticized China's construction of islands in the South China Sea, and backed the Philippines when it brought a case against China to the an international tribunal in The Hague.

"However, there have been some changes in Sino-Australian relations this year. Trump's coming to power and US withdrawal from the TPP was disappointing for Australia, which had high hopes for TPP. At this time, economic benefits are the country's priority."

"China is Australia's largest trading partner, its largest export market and source of imports. It's the biggest source of foreign investment and of tourists. Chinese-Australian trade relations are a skillful game from which, given the favorable conditions for Chinese economic development, Australia has benefited greatly," Zhimin said.