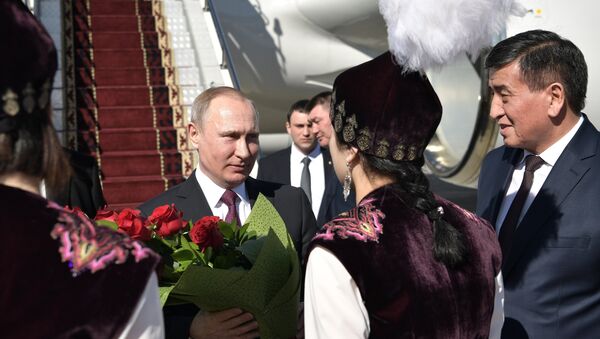 © Sputnik / Aleksey Nikolskyi
/
Go to the photo bank
Subscribe
This week, Russian President Vladimir Putin paid a visit to Central Asia, meeting with officials in Kazakhstan, Tajikistan and Kyrgyzstan. The Kremlin has also announced plans for the president to visit Turkmenistan in the near future. Geopolitical analyst Rostislav Ischenko explains what's really behind Putin's diplomatic blitz tour of the region.

On Sunday Putin arrived in the southern Kazakh city of Almaty for an informal meeting with Kazakh counterpart Nursultan Nazarbayev. The next day, the two leaders held an official meeting, after which Putin boarded his plane and flew on to Tajikistan, where he met with Tajik President Emomali Rahmon in Dushanbe. Putin wrapped up his trip by meeting with Kyrgyz counterpart Almazbek Atambayev in Bishkek on Tuesday.

Putin Notes Efficiency of Eurasian Union for Kazakhstan, Kyrgyzstan, Tajikistan
Also on Tuesday, the Kremlin confirmed that Putin also had held joint telephone talks with Turkmen President Gurbanguly Berdimuhamedov with Tajik President Rahmon during his visit to Tajikistan. The Turkmen leader extended an invitation for Putin to visit Ashgabat, and the Russian President assured Berdimuhamedov that he would take him up on the offer "in the foreseeable future."

What was the purpose of Putin's whirlwind diplomatic trip? As geopolitical analyst and Eurasia expert Rostislav Ischenko pointed out, Central Asia has been a consistent priority region for Moscow throughout the Russian President's tenure. "Just last year," he recalled, "Putin paid two visits to Uzbekistan, two visits to Kazakhstan, and received the Presidents of Kyrgyzstan and Kazakhstan in Moscow. That's not even counting the meetings [with Central Asian leaders] in multilateral formats."

Interestingly, however, news reports on the actual content of this week's talks have been scarce, limited mostly to messages of protocol. No long-awaited bilateral documents were signed, leading to intrigue over the real purpose of Putin's trip. Nevertheless, Ischenko emphasized that even the dry official reports do offer details of some of the important issues which were raised in negotiations. These, he noted, can be chalked down to two basic issues: the economy and security. 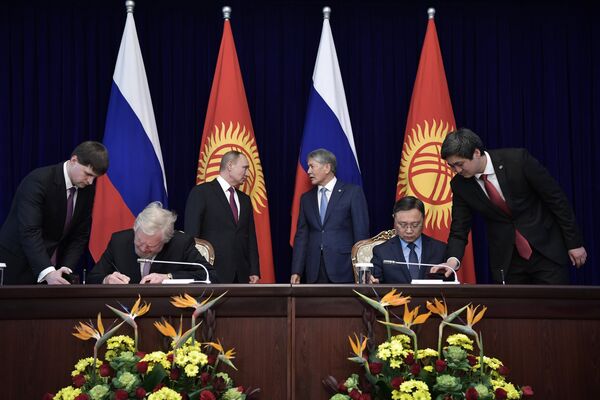 Firstly, in all three countries, Putin and his counterparts raised issues of economic and humanitarian cooperation. In the case of Kazakhstan and Kyrgyzstan this was done within the framework of the Eurasian Economic Union, and with Tajikistan on a bilateral basis. The expert suggested that "it is safe to say that in Dushanbe, the issue of the EEU was also touched upon, not least because Tajikistan has long been eyeing membership in this integration project, even though it has yet to make a final decision."

Secondly, Ischenko recalled, security issues were also touched upon in each of the three visits. "Kyrgyzstan and Tajikistan each host Russian military bases. They play a decisive role in ensuring the stability and security of the entire Central Asian region. Kazakhstan itself is also an important factor in ensuring the region's military and political stability."

Next Round of Syria Talks in Astana to Take Place on March 14-15
In fact, the analyst noted, beginning in 2016, Kazakhstan's influence began to spread beyond Central Asia, extending into the Middle East as well, particularly after Astana became the host of the inter-Syrian peace talks. President Nazarbayev has taken a personal interest in ensuring the peace talks' success, thus turning Kazakhstan into a global political player. And while it's obvious that Kazakhstan's influence in the Middle East cannot be compared to that of Russia or the United States, Ischenko stressed that "it is definitely greater than the vast majority of EU countries, with the possible exceptions of Germany, France, and the United Kingdom…"

Ischenko noted that so far as the issue of security is concerned, "things are more or less clear. Even though Central Asian authorities periodically attempt to use the presence of Russian military bases on their territory as a bargaining chip for economic preferences, everyone understands perfectly well that it would be suicidal to actually demand their withdrawal." 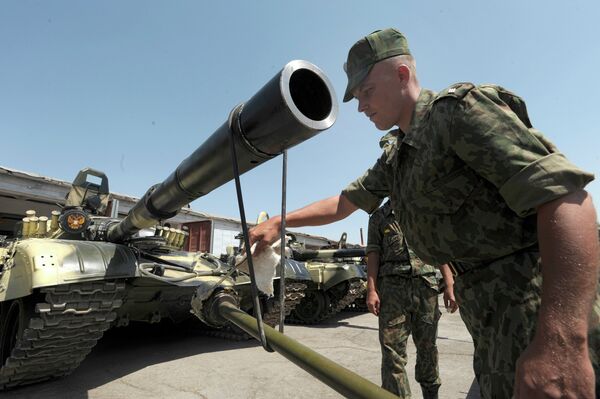 Russian forces on the territory of the 201st military base in Tajikistan. File photo
© Sputnik / Sergey Guneev
/
Go to the photo bank

Kyrgyzstan and Tajikistan, in particular, are literally on the frontline of the battle against Islamist fundamentalism, coming out of instability-prone Afghanistan, along with the associated problem of drug trafficking. "These countries' military and security capabilities fall far short of the scale of the threat," Ischenko stressed. Accordingly, he noted, "without Russian military support, they would risk being crushed almost immediately."

Just a Question of Time: Syrian Army Fights Daesh for Re-Liberation of Palmyra
Syria, the expert noted, is a perfect example of the capabilities of Islamist radicals to destroy fragile state structures. And that country, he added, was even more stable than some Central Asian governments before the incursion by the Islamist fundamentalists.

Kazakhstan is also perfectly aware of the threat it would face if the Tajik-Kyrgyz anti-terrorism wall were to fall, according to Ischenko. "Kazakhstan's armed forces are not powerful enough to provide reliable defense of its long southern borders," he noted. Moscow, therefore, is also fully aware of the threat posed by radicalism, and of Kazakhstan's role, in turn, as a thousands-of-kilometers-wide shield of Russia's soft southern underbelly.

Given this situation, the analyst stressed that it makes sense for Russia and the Central Asian states to be firmly interlinked on security matters; "the security of one state is impossible to achieve without ensuring the security of all states." Army Special Forces "Scorpion" soldiers and civilians at the airport during the 10th anniversary celebrations of the CSTO Russian air base opening in the town of Kant.
© Sputnik / Vladimir Pirogov
/
Go to the photo bank

"The membership of all four of these countries in the Collective Security Treaty Organization is proof of this fact," Ischenko added. Today, he noted, the main challenge for Moscow and for Putin is to increase Central Asia's multilateral cooperation within the CSTO, and to rely less on the kinds of bilateral security cooperation these countries are used to.

On the economic front, more work remains to be done, Ischenko admitted. "After the first successes in the creation of the Eurasian Economic Union, its members faced a mismatch between expectations and reality. The cumulative economic effects of integration remain far below the anticipated gains. Inter-union trade, while not falling in commodity terms…has also failed to grow."

Eurasia Integration: A Three-Speed Affair
Kyrgyz authorities have complained that the EEU has not solved its problems, including the socially explosive problem of youth unemployment. Tajikistan, the analyst noted, "is also questioning the wisdom of joining the economic union, especially since in many respects, its bilateral agreements with Russia give it more opportunities than those it can get by joining the EEU."

During his visit to the region this week, Putin appeared to make some small concessions on economic and social issues to Russia's Central Asian partners. This included amending a EEU agreement on the provision of technical assistance to Kyrgyzstan, discussing the possibility of increasing the number of permits for Tajik guest workers, and quotas for Tajik students studying in Russian universities, and signing an agreement on cooperation between the Kyrgyz Health Ministry and Russia's consumer rights watchdog. 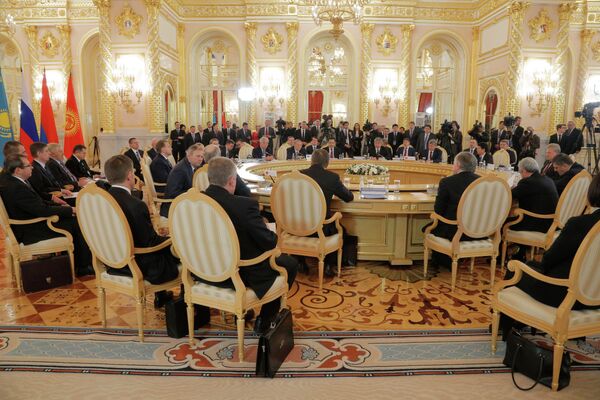 "Ideally," Ischenko noted, "it would be better to make do without these kinds of concessions, especially on a bilateral basis, instead of solving issues using a multilateral format. But Moscow sees the EEU as an essential integrative project, which cannot afford to fail." If this were to happen, "not only Moscow's influence in Central Asia, but its space for geopolitical maneuver would decline considerably."

No Grandmaster Standoff: Russia and China 'Pursue Same Goals' in Central Asia
"Factually," the analyst explained, "the challenge today is to make the EEU attractive and effective in solving the problems faced by Kyrgyzstan, which has already joined, in order to attract Tajikistan as well. After that, it will be possible to consider the full economic integration of Central Asia as a whole. This is an issue of fine-tuning. Today, it cannot be resolved merely at the expert level. Therefore, the answers to fundamental questions, and solutions to the most pressing problems, must be resolved in direct communication with other presidents."

That communication, both on economic and security matters, was ensured for by Putin's Central Asian trip.

American Socialist
2 March 2017, 22:21 GMT
000000
And what about Uzbekistan? With the passing of Karimov, will they still be playing both sides?