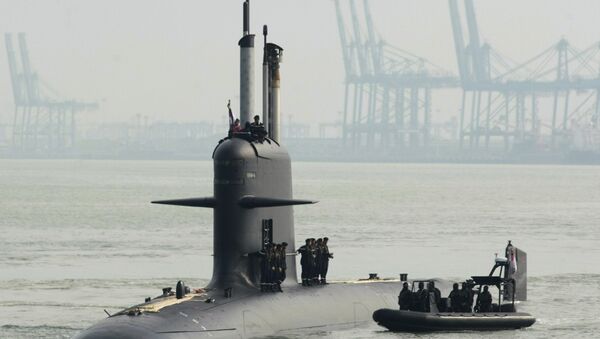 The first two French Scorpene-class submarines are not equipped with torpedoes, a submarine’s primary weapon. The Indian government has put on hold the acquisition of 98 Black Shark heavyweight torpedoes due to a bribery scandal that erupted last year.

Indian Navy to Set Up Met Facilities for Myanmar Navy
New Delhi (Sputnik) – The Indian Navy has successfully conducted the maiden firing of an anti-ship missile from the first of the indigenously built Kalvari-class submarines.

The submarine is said to have launched MBDA’s Exocet SM 39 missiles during the test firing in the Arabian Sea, said sources in the Indian Navy. Undergoing sea trials, the Kalvari is expected to be commissioned by the middle of this year.

​“The missile successfully hit a surface target at extended ranges during the trial firing held this morning. This missile launch is a significant milestone, not only for the Kalvari, which is the first in a series of Scorpene-class submarines being built in India, but also in enhancing the Indian Navy’s sub-surface warfare capability,” said a Navy statement.

India launched the INS Khanderi, the second Scorpene-class submarine in January this year. It is expected to be commissioned into the Navy by the end of this year. Indian Navy has said that all six Scorpene (Kalvari) class submarines being built in India will be equipped with EXOCET SM 39 anti-ship missile.

Weighing 650 kg, the subsonic EXOCET SM 39 is a long-range missile, capable of all-weather operation against all classes of warships. MBDA claimed that the missile can hit targets in extremely short time with full freedom to maneuver for the submarine after firing. It has a high hit probability against moving targets.

The Indian Navy has collaborated with DCNS of France in 2004 for construction of six Scorpene class submarine under the $3.5-billion contract. But the program has been delayed for more than four years with cost escalation of more than one billion dollars due to low-level of technological absorption capacity and purchase of materials in early years by Indian shipbuilder MDL.