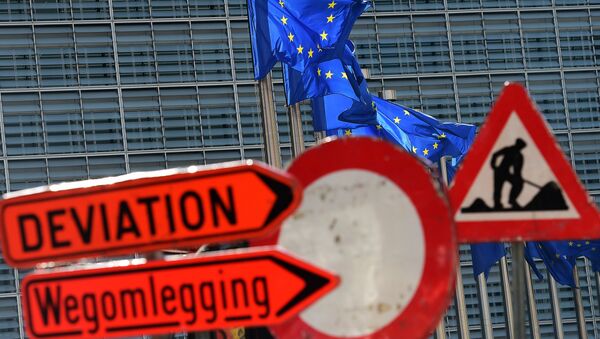 © AFP 2023 / EMMANUEL DUNAND
Subscribe
International
India
Africa
The foreign ministers of France and Germany - both founder members of the European Union - have conceded that the union will inevitably only find a way forward by having varying speeds of integration, in a further mark of growing divisions within the bloc.

"Without calling into question what we have accomplished, we must also find ways of better taking into account the different ambition levels of the member states so that Europe can respond better to the needs of European citizens," France's Jean-Marc Ayrault and Germany's Sigmar Gabriel said in a joint statement.

It follows the White Paper presented by European Commission President to the European Parliament, Jean-Claude Juncker, in which he outlined five scenarios for the EU in a post-Brexit world. The joint statement by the foreign ministers is significant, as both countries are facing elections this year against a backdrop of rising euroskepticism and populism.

The White Paper on the #FutureofEurope 🇪🇺 is out. It presents 5 scenarios for how the EU at 27 could evolve ➡️ https://t.co/o11S5yPGdu #EU27 pic.twitter.com/3vSkyMfQ5b

​"Let us be honest: For too long there has been a gap between what people expect and what Europe is able to deliver. So we should not pretend that Europe alone can solve the problem. It is time we — and Member States — were honest about this," Juncker said on unveiling his plan.

My SPEECH on the #whitepaper on the #FutureofEurope: "Quo vadis Europa at 27? Avenues for a united future at #EU27" https://t.co/K8o1li5TOU pic.twitter.com/cp1BfhweWv

"That is the starting point of the Commission's White Paper, which I am putting on your table today. It is time — I repeat — we made clear what Europe can deliver and what it cannot. Too often, the discussion on Europe's future has been boiled down to a binary choice of 'more' or 'less' Europe. That approach is misleading and simplistic," he said.

What does Europe mean to you? Here is our take on the European story: https://t.co/6JpoBUDqug #FutureofEurope pic.twitter.com/Z4xrOEr9e9

​Juncker outlined his vision of five ways to progress the EU project, which will go out to public consultation in the coming months and likely be put to a summit at the end of the year.

The EU27 focuses on delivering its positive reform agenda in the spirit of the Juncker Commission's New Start for Europe from 2014 and the Bratislava Declaration agreed by all 27 Member States in September 2016.

Scenario 2: Nothing but the Single Market

The EU27 is gradually re-centered on the single market as the 27 Member States are not able to find common ground on an increasing number of policy areas.

Scenario 3: Those Who Want More, Do More

The EU27 proceeds as today, but in addition it allows willing Member States to do more together in specific areas such as defence, internal security or social matters. One or several "coalitions of the willing" emerge in different policy areas.

Scenario 5: Doing Much More Together

Member States decide to share more power, resources and decision-making across the board. Decisions are agreed faster at European level and rapidly enforced.