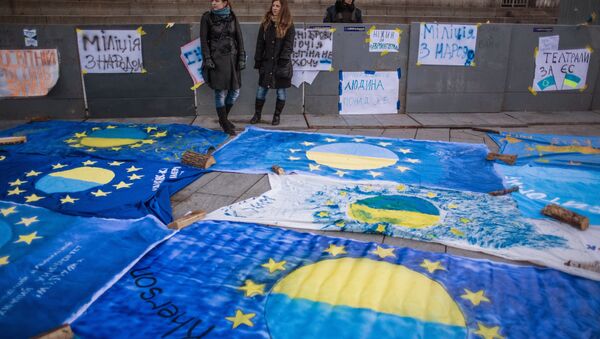 © Sputnik / Andrey Stenin
/
Go to the mediabank
Subscribe
International
India
Africa
Commenting on the recent announcement of the EU Parliament's press service that Ukrainian citizens will be able to travel to the EU visa free, Russian political scientist Kirill Koktysh called it a PR stunt and explained to Sputnik why the final decision on the issue might drag on for years.

"Once the change enters into force, and provided they have biometric passports, they will be able to enter the EU for up to 90 days in any 180-day-period for business, tourist or family purposes," said the statement of the press service.

According to the document, the deal has to be endorsed by the Civil Liberties Committee and Parliament as a whole, before being formally approved by the Council of Ministers.

Commenting on the announcement, Kirill Koktysh, Russian political scientist and associate professor of International Politics at Moscow-based MGIMO University, called it a PR stunt and added that the final decision on the issue might drag on for years.

He further suggested that the EU will try to hold back on the final decision for as long as possible.

"We understand that the final decision of the visa free travel will be made by certain member states, therefore the decision of the European Parliament doesn't offer any guarantee at all," Koktysh told Sputnik.

"It is only too clear that the actual decision will be subject to so many conditions which will be predeterminedly unacceptable to the majority of Ukrainians," he said.

Ukrainian President Petro Poroshenko on Twitter hailed the move as a "formal, but important step on the road."

​Commenting on the remarks of the Ukrainian leader, Kirill Koktysh said that it is only too understandable as Poroshenko's legitimacy depends on the decision.

The Ukraine's president has been promising his citizens visa-free travel to the EU for nearly three years. It was part of a partnership accord signed back in 2014.

World
'Suitcase Without a Handle': West 'Cannot Afford' to Abandon Ukraine
"Before granting this visa waiver, EU member states revised the visa waiver suspension mechanism to allow visas to be reintroduced more easily in exceptional cases. This revision was approved on Monday by the Council. The legislation will be signed by Parliament’s President Antonio Tajani and representatives of the Maltese Presidency of the Council on Wednesday 1 March and enter into force 20 days after it is published in the EU Official Journal," says the official website of the European Parliament.

"The EU and Kiev began visa liberalisation negotiations in 2008. At the end of 2015, the European Commission concluded that Ukraine had made the necessary progress and had met all the benchmarks, despite the exceptional internal and external challenges it faced in recent years, and presented a proposal to grant its citizens visa-free access to the EU from April 2016."

The visa waiver will apply to all EU member states except Ireland and the United Kingdom. It does not confer a right to work in the EU.