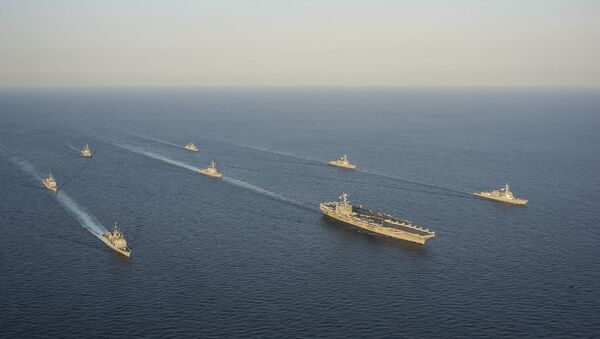 WASHINGTON (Sputnik) — US forces and partners from seven nations launched Pacific Partnership 12, the largest multinational disaster relief preparedness training operation run each year in the Indo-Asia-Pacific region, the US Navy said in a press release on Wednesday.

US Navy Struggles to Dispose of First Nuclear Aircraft Carrier
The exercise includes civilian and military participants from the United States, United Kingdom, South Korea, Japan, Malaysia, Vietnam and Sri Lanka, which is participating for the first time.

Sri Lanka, Malaysia, and Vietnam will host the exercise, and the Navy noted that a visit by the expeditionary high speed vessel Fall River to Vietnam coincides with the 22nd anniversary of the normalization of diplomatic relations between the former adversaries.

The Pacific Partnership exercise was created in the aftermath of the December 2004 tsunami in Southeast Asia, and has focused on disaster relief, search-and-rescue training and expert exchanges, among other activities.

Pacific Partnership will conduct mission stops in Vietnam for the fourth consecutive year. The visit by Fall River to Vietnam is in conjunction with the 22nd anniversary of the normalization of diplomatic relations between the United States and Vietnam. Along with events such as the Naval Engagement Activity (NEA) maritime collaboration, Pacific Partnership underscores the deepening relationship between the United States and Vietnam.

Tsunami Warning Issued After Powerful Quake Hits South Chile
This year's mission will return to Malaysia, where the US continues to strengthen ties and cooperation.

Pacific Partnership will continue to capitalize on the Women, Peace and Security program — an international initiative designed to not only empower women, but also demonstrate the value of their inclusion in the planning and implementation of disaster preparedness and relief efforts for their respective countries.

"We've conducted extensive planning with our host nations and our mission partners over the last six months," said Capt. Stanfield Chien, deputy commodore of Coastal Riverine Group 1 and Pacific Partnership mission commander. "I'm very pleased with how we've come together as a team and are ready to execute this year's Pacific Partnership mission."