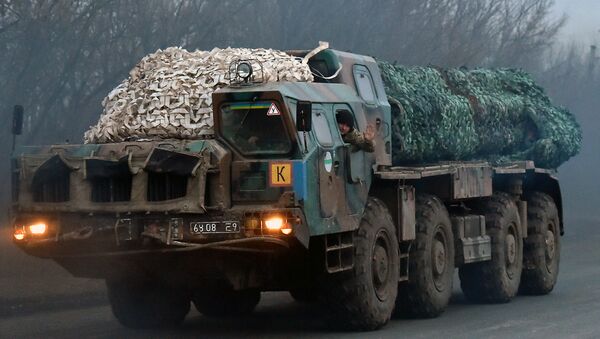 © AFP 2022 / SERGEI SUPINSKY
Subscribe
Kiev recently announced that it had created a domestically-produced shell for the Smerch multiple launch rocket system (MLRS). But according to Nikolai Makarovets, director of the Splav State Research and Production Enterprise, which produces Smerch, the Ukrainian defense industry simply doesn't have the production capacity to do so.

Earlier this month, Ukrainian President Petro Poroshenko announced that a new domestically-produced shell, the Olha, had been developed for the Smerch, and that the complete production cycle necessary for producing the weapon has been established. If confirmed, this would enable the Ukrainian military-industrial complex to furnish the approximately 75-95 Smerch systems in Kiev's possession with domestically-made shells.

However, according to Splav director Nikolai Makarovets, Kiev's announcement of a Ukrainian-made shell for the Smerch sounds little more than political posturing. And Makarovets should know. The Splav State Research and Production Enterprise, located in Tula, Russia, has been designing and manufacturing the Smerch ('Whirlwind') rocket artillery system since the late 1980s.

Poroshenko Boasts of 'New Ukrainian Missile' in Blockbuster-Style Video
According to the veteran designer, Ukraine's Yuzhnoye Design Office is presently the only Ukrainian design bureau that's capable of developing rockets. "Before the collapse of the Soviet Union, I worked at the Yuzhnoye Design Bureau. To this day it is the only Ukraine-based design bureau capable of creating rockets…" Makarovets recalled.

However, the designer added that "at present, [Yuzhnoye] cannot create rockets of our caliber. They simply do not have the equipment necessary to develop the rocket's air frame, or a nozzle block with a two meter diameter" necessary to produce Smerch's rocket projectiles. 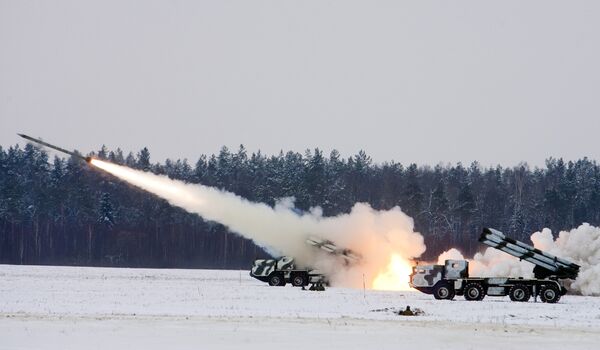 The designer also pointed out that the only Ukrainian manufacturer presently capable of producing rocket fuel for a Smerch rocket is the Pavlograd Chemical Plant. However, this plant has now halted its operations, Makarovets said.

Poroshenko Speaks of Threat of 'Full-Scale War' With Russia
Development of the Smerch rocket artillery system began in the mid-1980s, and the system was introduced into the Soviet military in 1989. The deadly system's 12 barrels are fitted with 300mm rockets, which have an effective firing range of between 70 and 90 km, and a maximum documented range of up to 120 km. The mobile system can be deployed for combat in less than five minutes. Several variants of the system have been produced since the USSR's collapse. In addition to Russia and Ukraine, Smerch has been exported to over a dozen countries across the former Soviet Union, the Middle East, Asia and Latin America.

At the height of the civil war in Ukraine in 2014 and early 2015, Smerch systems were used by Ukrainian forces to fire on Donbass cities including Donetsk and Lugansk.

Since then, Kiev has announced a series of new design projects, including the Neptun anti-ship missile, the Korshun sea- and ground-based cruise missile, and the Olha rocket projectile for MLRS systems. However, since then, there has been little word on these systems' further development, and some military experts have suggested that the new weapons were little more than the rebranding of old Soviet-era designs.