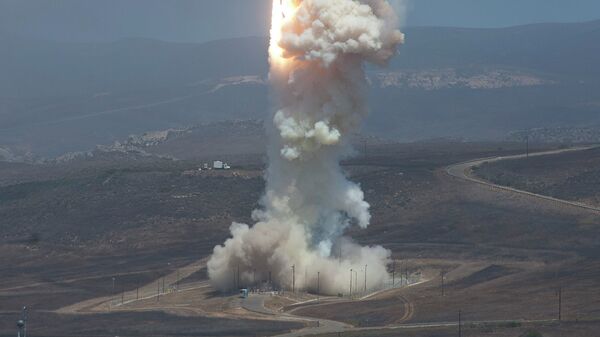 © Flickr / U.S. Missile Defense Agency
Subscribe
International
India
Africa
A new investigation has revealed that despite failures in the capacity of cruise-missile interceptors to eliminate enemy threats, including warheads fired from smaller-scale nuclear powers like North Korea, some US government officials continue to insist that problems do not exist.

The Ground-based Midcourse Defense (GMD) system is an arsenal maintained by the Pentagon that is used to neutralize threats posed by ‘limited’ nuclear strikes from countries like Iran or North Korea. An eye-opening report published by the Los Angeles Times revealed that, not only have many of the interceptor’s thrusters failed during simulation testing, causing the interceptor to stray from its flight path, but also that top GMD contractors have glossed over the issue, insisting that the simulations have been successful.

The Times obtained access to Pentagon documents showing that a "foreign object" caused the internal guidance module to fall loose and create a short circuit. This could have been a loose wire or simply debris, government officials and scientists said. Particularly, the thrusters attached to the interceptors were tested in January 2016 after contractors redesigned them to correct for flaws.

"It did not go as planned. One of the interceptor’s four thrusters shut down during the test, causing the interceptor to veer far from its intended course," the LA Times reported.

The "foreign object" thought to have brought about the failure has not received keen attention from government oversight officials, according to L. David  Montague, former missile defense program director at Lockheed Martin. "If there’s a foreign object in one unit, it’s sort of whistling past the graveyard to assume that’s a once-in-a-lifetime event," Montague said.

Despite the lingering issue of faulty thrusters on older interceptors, missile-defense specialists said that 34 of the 37 are vulnerable to faulty mid-flight performance as a result of outdated circuit boards. While the US plans to increase its interceptor fleet to 44, "agency officials do not plan to retrofit or repair the older circuit boards," the paper noted. According to Pentagon spokesman Chris Johnson, "no corrective actions are needed,” based on a review board report. The review of the program is classified.

Laura Grego, a physicist from the Union of Concerned Scientists, stated, “What is the point of using tests to identify problems if you don’t fix those problems afterwards? At some point you have to decide if you mean to build something that works or something that simply looks like it works.”

One military report on the GMDs does, however, confess that the program "has demonstrated a limited capability to defend the US Homeland from small numbers of simple intermediate-range or intercontinental ballistic missile threats launched from North Korea or Iran." The Pentagon’s Department of Operational Testing and Evaluation (DOT&E) is unable to measure GMD performance, "due to lack of ground tests supported by accredited modeling and simulation."

According to the former Pentagon DOT&E head Philip E. Coyle, the failed January 2016 tests cast the program’s reliability into doubt. "One out of four [thrusters] failed, and that’s important. I don’t think anybody should whitewash that."

The program has been in place since the administration of President George W. Bush, who authorized it in 2004. Now, 12 years later, a watchdog report from the Government Accountability Office (GAO) stated that the program has performed eight interceptor flight tests, "four of which were successful." A multi-billion dollar program, with a 50 percent success rate is not thought to be a prudent use of public funds, observers have pointed out. Further, a "simple"ballistic strike from North Korea or Iran is something the US has "partial capability" to defend against, the report adds. It also suggests that fundamental issues with the vehicle design "represent a performance plateau" that is insurmountable without a "multibillion dollar investment by MDA [Pentagon’s Missile Defense Agency.]"

According to the same GAO report, "GMD flight testing, to date, was insufficient to demonstrate that an operationally useful defense capability exists; and a quantitative assessment of GMD’s operational effectiveness is currently not possible."