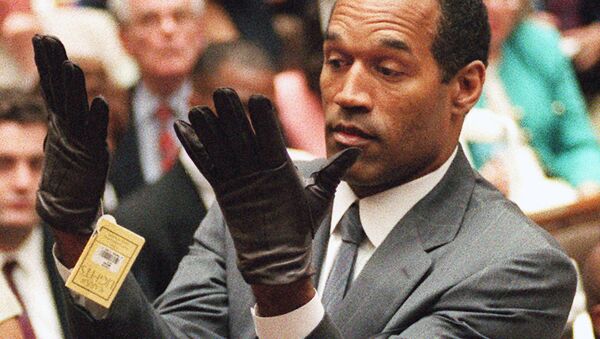 © AP Photo / Vince Bucci
Subscribe
International
India
Africa
OJ Simpson is to sit for a parole hearing in July, and experts anticipate that he will be granted an early release from his prison sentence later this year. Simpson was sentenced to serve 33 years in prison for armed robbery and kidnapping. Some nine years into his sentence he is up for parole due to good behavior.

Now closing in on his 70th birthday, Simpson was sentenced to 33 years in Lovelock Correctional Center in Nevada when he was found to have been involved in a 2007 armed robbery to retrieve items he claimed had been stolen from him by a retailer of sports memorabilia.

One tenet of Simpson's conviction was that he would not be eligible for parole for nine years. According to Las Vegas defense attorney Daniel Hill, Simpson has been a model prisoner, and is likely to be released early. "He's the kind of person who gets paroled," Hill said. "He has done a significant amount of time and, by all accounts, hasn't caused any problems."

To be released, Simpson must convince four of his seven parole-hearing commissioners that he has avoided drugs, alcohol, gang activity, and disobedience while incarcerated. Simpson previously was paroled from five of his nine charges in 2013.

The ex-football star was formerly the defendant in the one of the most publicized trials in US history, after he was accused, and eventually acquitted, of the 1995 double murder of his ex-wife Nicole Brown and her friend Ron Goldman. A subsequent civil lawsuit by the families of Brown and Goldman found Simpson liable for the deaths.

Chelsea Manning May Have Parole Revoked for Suicide Attempt

Despite owing $33.5 million to the families of those he acquitted of killing, Simpson's NFL pension (estimated to be some $2.7 million by Sports Illustrated) is protected by the Employee Retirement Income Security Act, which prevents outstanding claims from collecting from the pensions of retirees. The Brown and Goldman families have seen "very little" of the money owed to them as a result of the civil suit, according to the New York Post.

A source close to the Goldmans said that "[the families] have vowed to pursue him to the ends of the earth and will continue to do so after he walks out of prison. His nightmare might be coming to an end, but their's never will."