Over 40% of Germans Prefer Schulz to Merkel - Poll 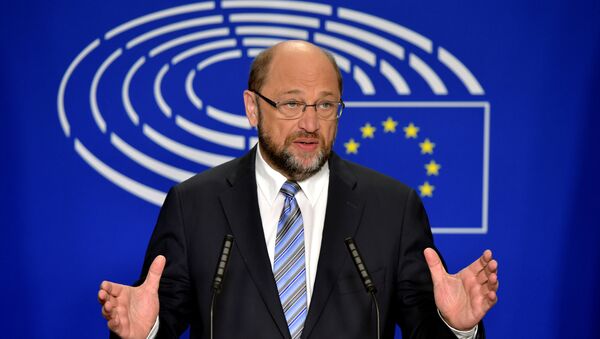 © REUTERS / Eric Vidal
Subscribe
As many as 43.5 percent of Germans would like to see Martin Schulz from the Social Democratic Party as the country's next chancellor rather than the incumbent Angela Merkel, a poll showed.

Half of Germans Believe Merkel's Rival Schulz Unlikely to Become Next Chancellor
MOSCOW (Sputnik) — According to the Civey survey, released by Der Spiegel magazine on Sunday, 37.9 percent would prefer Merkel, who represents the Christian Democratic Union of Germany (CDU) allied with the Christian Social Union in Bavaria (CSU), while 18.6 percent said they did not know which of the two candidates to choose.

According to the results sorted by party preference, 63.3 percent of supporters of the far-right Alternative fur Deutschland (AfD) party could not choose one candidate, 19.1 gave preference to Merkel and 17.6 to Schulz.

The supporters of The Left party favored Schulz, with 73.6 percent of the respondents supporting him and only 9.5 percent backing Merkel, while 16.9 percent could not make their choice.

The respondents were also asked if they would like to see the number of German active duty soldiers lower, rise or remain the same. The overall results showed that 50.6 percent believed that there should be more soldiers, 25.6 percent thought the number had to stay the same, 16.3 thought it had to decrease.

CDU/CSU and AfD supporters voted mostly in favor of raising the number of soldiers, with 70.7 percent and 65.9 percent backing the increase, respectively. Only 42 percent among SPD supporters wanted the increase, while The Left's 49.4 percent favored the decrease, with only 14.5 percent backing the larger number of soldiers and 30.4 percent wishing for it to stay the same.

The survey was conducted on February 17-26 among about 5,000 respondents.