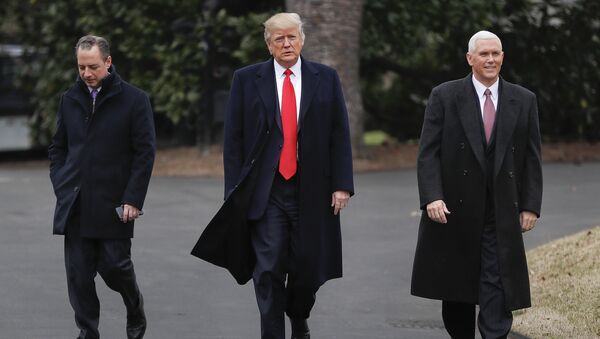 The US House Intelligence Committee did not find any evidence so far proving that President Donald Trump’s advisers had any contacts with Russian officials during the 2016 US presidential campaign, Committee Chair Devin Nunes said in a press conference on Monday.

WASHINGTON (Sputnik) — On February 15, The New York Times reported, citing phone records and intercepted calls, members of Trump’s presidential campaign team and several associates allegedly contacted Russian intelligence and government officials prior to the 2016 US elections. Both Washington and Moscow have repeatedly refuted the allegations.

"Nor there [were] any evidence presented about Trump advisers speaking to Russians," Nunes stated. "I don't have any evidence of any phone calls. It does not mean that they do not exist, but I don't have that. And what I have been told by many folks that there is nothing there. But we are still looking into that."

CIA Chief Contacted Reporters to Refute Claims of Trump's Ties With Russia
The US House Intelligence Committee will publicly release findings of its ongoing investigation into alleged Russia's interference in 2016 US presidential election, Nunes said.

"They will be public, they will be publicized," Nunes stated when asked whether the committee's findings would be released. "Likely what will happen is we will probably have just an interim report of some kind that we will put out on what we have."

"At this point what are we going to appoint a special prosecutor to do exactly?" Nunes stated. "If at some point we have serious crimes committed, it would be something that we would consider, but at this point we don’t have that."

The Republican lawmaker added that right now the only serious crimes committed were the leaking of documents to the press.

The tensions between Trump and a number of US news outlets has intensified since the inauguration of the politician in January.

Earlier in the month, the president slammed "fake news" reports that kept citing anonymous White House sources alleging chaos in his administration as well as contacts with Russian intelligence services.