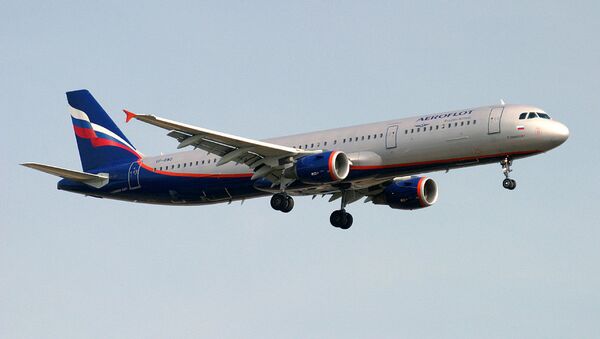 Flight #SU2391 from Zurich to Moscow safely returned to ZRH — circled for 2h in the air https://t.co/ml8n1d4Ngq pic.twitter.com/nBNSxUC8NU

The plane #AFL2391 #Zurich #Moscow landed in Zurich because of a technical problem. More fear than harm.

Aeroflot's Airbus A321 passenger plane was en route from Zurich to Moscow. It took off from the Swiss city's airport at 13:41 local time. The landing took place at about 15:30 local time.

ALERT Aeroflot #SU2391 will return to Zurich after fire was reported on left engine during takeoff (pic: @Sebb8911) pic.twitter.com/6fkUvCsN5C

"Aircraft flight SU2391 from Zurich to Moscow at 17:37 [Moscow time] landed in the airport where it took off due to a technical fault," Aeroflot's press service told Sputnik.

20 Minuten cited an eyewitness as saying that during takeoff, smoke from the left engine was seen.

The plane was reportedly burning fuel to devert back to Zurich. According to Flightradar, the Aeroflot's plane was circling in Swiss airspace at an altitude of some 3,000 meters. The incident took place after some hour and a half of its flight. Media reports suggest firefighters arrived at the scene.

An Aeroflot A321 Airbus tour around Constance after taking off from ZRH [Zurich]. Firefighters waiting

The incident supposedly occurred due to engine issues. Swiss Watson.ch.news site reported citing a source that there was fire in the plane's left engine.

​AFL2391 back again and safely landed!

The number of passengers aboard the plane is unknown so far, however, there may be up to 150 people.

Aeroflot's press service told Sputnik that the next flight of the air carrier will deliver the plane's passengers to Moscow.