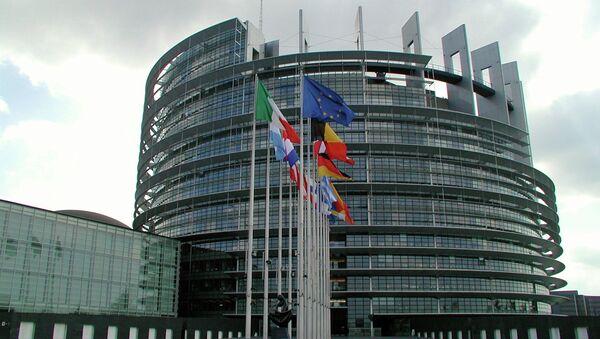 © Flickr / jo.schz
Subscribe
International
India
Africa
The Parliament of the EU has granted special powers to its president to cut live broadcasts of its debates if discussions descend into slurs or worse - and to remove video and audio traces of the offensive speech from its system.

Unfortunately, the rules governing what is actually hate speech are far from clear, and some say pulling the plug on any debate is an act of censorship.

The rule itself, apparently intended to prevent the body from accidentally amplifying racist speech, was not even made public, AP says, but was first reported on by Spanish newspaper La Vanguardia. It seems to be an attempt to check far-right and anti-immigrant politicians like the Netherlands' Geert Wilders, who has already been convicted of inciting discrimination for comments he made about Moroccan immigrants in a 2014 speech.

"This undermines the reliability of the Parliament's archives at a moment where the suspicion of 'fake news' and manipulation threatens the credibility of the media and the politicians," Tom Weingaertner, president of the Brussels-based International Press Association, told AP.

The EU Parliament contains a number of far-right or hateful parties whose members are prone to saying frightening things outside the legislative body, like questioning how bad the Holocaust really was or suggesting that Jewish people are a security threat and should be "tallied up," as Jobbik party Deputy Parliamentary Leader Márton Gyöngyösi has.

However, racist rants within the Parliament itself are not unheard of. Just about a year ago, Eleftherios Synadinos, an MEP for Greece's far-right Golden Dawn party, was expelled by the EU Parliament president from a parliamentary meeting in Strasbourg after Synadinos apparently called Turks "dirty and polluted" and "like wild dogs" during a debate.

Flags, slogans, some of them offensive, on t-shirts and banners and shouting matches are common in the Parliament buildings, AP notes.

"There have been a growing number of cases of politicians saying things that are beyond the pale of normal parliamentary discussion and debate," said British MEP Richard Corbett, a supporter of the new rule. The EU has a responsibility to ensure that it doesn't help raise the bandwidth of those who want to use its broadcasting power to spread a message of hate, he told AP.

The new rule, 165, would allow the chair of a debate to cut a live broadcast "in the case of defamatory, racist or xenophobic language or behavior by a member" and fine offenders a maximum of $9,500.

Offending material could also be "deleted from the audiovisual record of proceedings" — so no one would know it had happened unless a reporter in the room catches it. But a videotape in four languages would be kept running to serve as a legal record while other broadcasts were cut, AP noted.

There is also the option of introducing a broadcast delay of a few seconds, to help catch offensive speech before it has a chance to leave the room, but with 24 languages used in the parliament, translation would have to be awfully quick in order to be effective.