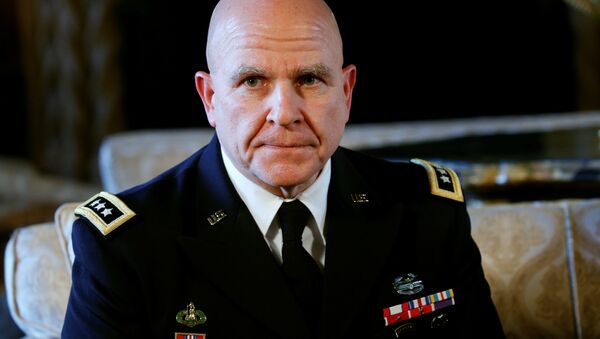 The appointment comes a week after Lt. Gen. Michael Flynn resigned over media reports that he provided Vice President Michael Pence and other White House officials with incomplete information about his phone conversations with the Russian ambassador to the US before Trump's inauguration.

"As a man of tremendous talent and tremendous experience … he is highly respected by everybody in the military and we’re very honored to have him," Trump said.

McMaster Doesn't Agree With Trump on 'Radical Islamic Terrorism' Term
McMaster thanked the president, saying it was "a privilege to continue serving our nation."

Who is Herbert McMaster?

General McMaster's Appointment Might Mean 'More US Forces in Iraq and Syria'
McMaster served in an American regiment in Germany. He took part in Operation Desert Storm during the first Gulf War and was awarded the Silver Star. He also served in the wars in Iraq and Afghanistan.

In 2014, McMaster was appointed Director of the US Army Capabilities Integration Center.

In 2014, Time magazine placed him on a list of the 100 most influential people in the world, hailing him as the "architect of the future US Army." According to the article, "McMaster might be the 21st century Army’s pre-eminent warrior-thinker."

According to the NYT, unlike Michael Flynn, Lt. Gen. McMaster "has no links to Trump and is not thought of as being as ideological as the man he will replace."

In addition to his military accolades, McMaster is also a prominent scholar and the author of several military historic works. In 1997, he authored the book "Dereliction of Duty" which criticized the actions of US military leadership during the Vietnam War.

He has also expressed persistent concerns about the size and technical capabilities of the US military.

"We are out-ranged and out-gunned by many potential adversaries. [And] our army in the future risks being too small to secure the nation," McMaster was quoted as saying by Breaking Defense.

'Forceful but Not Tense'

"In a nod to the potential tensions that could emerge between McMaster and Trump on Russia, the new national security adviser has warned that the U.S. is losing its potential edge against Russia in land warfare," the article read.

"Unlike his predecessor, who many would say was 'wound too tight,' McMaster is forceful but not tense, with a good sense of humor. He is, as one foreign policy academic put it, a 'straight arrow,'" an article in the Washington Post read.

"This is not a man to promote coddling with Russia or to buy into the notion that NATO is a burden or to indict the entire Muslim world. He’s no Michael T. Flynn – and that’s a good thing," the article added.

Military Man, not a Politician

According to senior member of the Russian Parliament’s upper house Igor Morozov, McMaster’s appointment is a good sign.

"Trump picked him in order to build relations with European partners, China, the Middle East and, of course, Russia. This is one of the key areas of Trump’s agenda," Morozov told the Russian online newspaper Vzglyad.

Andrei Korobkov, a professor of Political Science at Middle Tennessee State University, noted that as a team leader Trump is authoritarian and his entire team will try to match him.

"For Trump, normalization with Russia remains among the strategic priorities, but he is opposed by a broad coalition. This is why his next tactical steps will be even more hardline rhetoric on Russia and promises no to lift sanctions. At the same time, in strategic terms, he wants to ease tensions," Korobkov pointed out.

Expert in US politics Kirill Benediktov argued that McMaster’s stance towards Russia will depend on what Trump thinks.

"McMaster has no experience in politics. He is a military man, but not a politician at all," he said.

According to Korobkov, from Moscow’s perspective Flynn was the optimal candidate while the rest are a choice between the worse and the worst.

"Btw, McMaster is not the worst option, for example, in comparison with John Bolton, known for his anti-Russian views," the expert told Vzglyad.
Benediktov underscored that McMaster’s views are not much different from the views of other US military officers and officials.