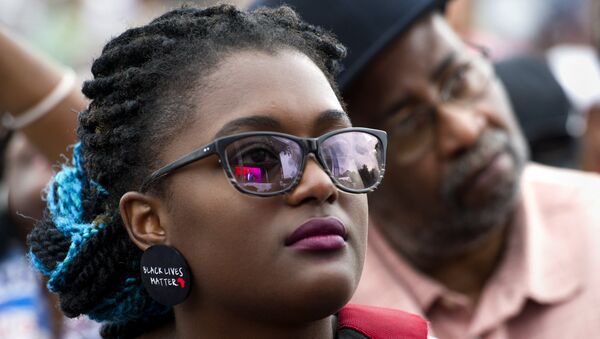 © AP Photo / Cliff Owen
Subscribe
Recently, news reports appear to have died down regarding the shootings of unarmed black men and women in the US. Does that mean that it is no longer an issue? Despite the lack of coverage this is a situation which is continuing and needs to be fixed, a media expert has told Sputnik.

A poignant video released by news site, This Matters, it shows US black parents having a frank conversation with their children on the importance of remaining calm when speaking to a police officer.

In one heartbreaking talk, the parent tells her child: "Do everything that you can to get back to me."

These conversations are not unusual or unique, they are commonplace, as are the killings of unarmed men and women in the US. However, reports on recent shootings are only being covered by local US media sites.

In case you missed it, the latest shooting took place on February 18, when a 22-year-old unarmed black man was shot by police in Portland, US.

According to The Counted, a database run by the Guardian that lists all the men and women killed by the police in the US since 2015, the last unarmed black man to die in 2016 was a 39-year-old man named Marlon Lewis Taylor from North Carolina.

Lewis was in an agitated state, according to reports, and officers tried to shock him with a taser, however he soon became unresponsive, was handcuffed and died shortly after.

The difference between this story and others before it, is that it barely made, let alone the front page, but any sort of coverage in mainstream media at all.

When other unarmed black men, such as Alton Sterling and Philando Castile were killed by police officers in the US in July 2016, soon after, protests broke out globally and the world's media was focused on the abhorrent injustice towards African Americans' rights in the "land of the free."

Dr. Wilmer Leon, political TV host and commentator, discussed with Sputnik the sudden lack of media attention around the issue and how it is most definitely still a problem in the United States of America.

"Mainstream media has not been reporting these killings for a few reasons. A great deal of mainstream media coverage has focused on the US President Donald Trump, there has been very little space provided to cover any other stories. Also, there has not been the public outcry displayed by protests and other types of public action to call attention to the recent killings," Dr. Leon told Sputnik.

​Dr. Leon believes the media has became easily distracted by other issues, because these atrocities are not being committed upon their friends and loved ones in the communities in which they live.

"It reverts back to being the 'story of the other' instead of an on-going problem with a very long historical context. Also, once the narrative/focus shifted away from the police atrocities in African American communities and became focused on 'Blue Lives Matter' and protecting the police from 'unwarranted attacks,' mainstream media no longer covered it," Dr. Leon added.

The US president recently visited the National Museum of African American History and Culture in Washington DC, and in his speech, he pledged that he would "unite the country and combat bigotry."

​Dr. Leon says however that Donald Trump needs to understand the driving force behind the division, making reference to the president's comments around the city of Chicago. According to Dr. Leon, Trump sees it as just a crime problem, but fails to understand that crime is the result of other much larger issues such as poverty, poor education, no jobs or opportunity, and that crime is a direct byproduct of hopelessness.

"According to an article in the Slate.com, the average white family has a net worth of US$116,000. In comparison, nearly 40 percent or 5.6 million African American homes in the US have zero or negative net worth. In addition, when you deduct the family car as an asset, the median black family in America only has a net worth of US$1,700 dollars," Dr. Leon told Sputnik.

The divide between rich and poor, black and white is an inherent problem in the US, and Dr. Leon, as many others, believes that the struggle of African Americans in the US, and perhaps of black people across the globe, for equality and to simply remain alive, is embedded in slavery.

"There is no other group of people in the history of the world that has been subjected to the Constitutional, legal and social oppression and terrorism that blacks and African Americans have been subjected to, continue to be subjected to and still been able to make the advancements that we have made," Dr. Leon concluded.

Some may say that the killing of unarmed black men and women may not warrant the same media attention as it had previously, but the root cause of the problem remains and is an issue worth reporting.

000000
Popular comments
Corporate media never were the side of blacks. It was all a destabilization tactic. The globalists hate local cops because they lack instant control over their arrest authority.

bobbibrestel
24 February 2017, 17:27 GMT2
000000
In the Usa all the media are in +/- 4 hands !! Supported by Soros and his Democratic gangs !!! There let the police do what ever there like !!! There need the support from the police to stay out of jail them self !!! In the Usa it seams black live don't matter !!!
tobi.gelando
24 February 2017, 17:41 GMT2
000000
Newsfeed
0
New firstOld first
loader
LIVE
Заголовок открываемого материала
Access to the chat has been blocked for violating the rules . You will be able to participate again through:∞. If you do not agree with the blocking, please use the feedback form
The discussion is closed. You can participate in the discussion within 24 hours after the publication of the article.
To participate in the discussion
log in or register
loader
Chats
Заголовок открываемого материала
Worldwide
InternationalEnglishEnglishMundoEspañolSpanish
Europe
DeutschlandDeutschGermanFranceFrançaisFrenchΕλλάδαΕλληνικάGreekItaliaItalianoItalianČeská republikaČeštinaCzechPolskaPolskiPolishСрбиjаСрпскиSerbianLatvijaLatviešuLatvianLietuvaLietuviųLithuanianMoldovaMoldoveneascăMoldavianБеларусьБеларускiBelarusian
Transcaucasia
ԱրմենիաՀայերենArmenianАҧсныАҧсышәалаAbkhazХуссар ИрыстонИронауОssetianსაქართველოქართულიGeorgianAzərbaycanАzərbaycancaAzerbaijani
Middle East
Sputnik عربيArabicArabicTürkiyeTürkçeTurkishSputnik ایرانPersianPersianSputnik افغانستانDariDari
Central Asia
ҚазақстанҚазақ тіліKazakhКыргызстанКыргызчаKyrgyzOʻzbekistonЎзбекчаUzbekТоҷикистонТоҷикӣTajik
East & Southeast Asia
Việt NamTiếng ViệtVietnamese日本日本語Japanese俄罗斯卫星通讯社中文（简体）Chinese (simplified)俄罗斯卫星通讯社中文（繁体）Chinese (traditional)
South America
BrasilPortuguêsPortuguese
NewsfeedBreaking
19:37 GMTThe US Space Force’s Oldest Adversary, Social Media, Roasts Their New Uniforms
19:25 GMTTraffic on Motorway in German Bavaria Halted Due to Armed Hostage-Taking Situation - Reports
19:24 GMTJoe Biden, DHS Chief Upset by 'Horrible' Videos of Border Patrol Dealing With Haitian Migrants
19:24 GMTBiden Believes Footage From US-Mexico Border ‘Horrific’ and Supports Probe
19:15 GMTSoldiers Killed in Galwan Valley Clash With India Now Part of Patriotism Lessons for Kids in China
19:14 GMT‘An Unpredictable Ally’: Does the AUKUS Pact Undermine the Quad's Significance?
19:11 GMTSearch for Fiancé of Gabby Petito, Brian Laundrie, Resumes in Florida Wilderness
18:54 GMTFrench Defenсe Minister Says US Instigating Confrontation With China
18:48 GMTNew ‘Storytelling’ in Skripal, Litvinenko Cases Meant to 'Sabotage' Effort to End Russia-UK Cold War
18:40 GMTTexas Governor Says Biden Has Not Granted Federal Emergency Declaration Over Border Crisis
18:39 GMTWoman Claims US Billionaire Leon Black Raped Her in Jeffrey Epstein’s Townhouse, Media Says
18:29 GMTMigrants Escape After Overtaking Transport Bus
18:08 GMTVolcano Continues to Erupt on Spanish Island of La Palma
17:49 GMT'US Hegemonic System' Has 'Failed Miserably', Iran's Raisi Tells UN
17:24 GMTUSAF Reveals It Has Five New B-21 Strat Bombers in Production, Not Two as Originally Reported
17:07 GMTAncient Pyramid Made From Volcanic Ash Likely Built to 'Calm Earth’s Anger,' Media Says
17:00 GMTDozens Protest Outside UN Headquarters Against US Global Military Engagements
16:43 GMTUS House Democrats Introduce Legislation to Prevent Presidential Abuses
16:35 GMTPalestinians Ready to Renew Talks With Israel If They Show Readiness, Foreign Minister Says
16:31 GMTRussian Embassy in UK Slams Scotland Yard's Approach to Fact-Finding in Skripal Case