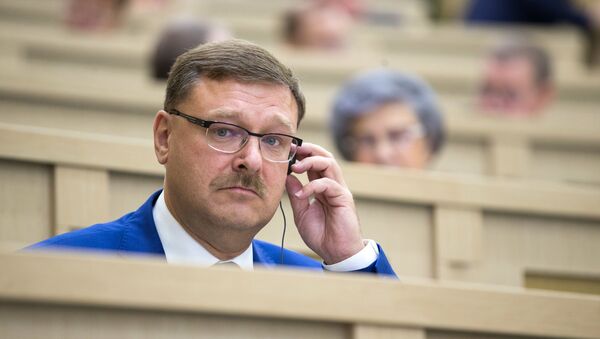 © Sputnik / The Press-service of the Federation Council of the Russian Federation
/
Go to the mediabank
Subscribe
International
India
Africa
Washington needs to engage in talks on nuclear arms limitations with Russia if it does not want the Cold War-era nuclear arms race back, senior Russian lawmaker Konstantin Kosachev warned on Friday.

Russia to Maintain Dialogue With US on Iran Nuclear Deal - Ambassador
MOSCOW (Sputnik) — In a Russian-language statement on social media, Kosachev voiced concern over US President Donald Trump’s criticism of the existing nuclear arms reduction treaty, called the New START, which expires in 2021.

"Trump’s Make America Great Again slogan, if it means nuclear supremacy, will plunge the world back into the 50-60s when the nuclear arms race was at its worst," the Russian lawmaker wrote on Facebook.

Trump said in a recent interview the New START treaty was "just another bad deal" and argued the United States had fallen behind in terms of nuclear capabilities. He did not specify whether he was going to abolish the deal with Russia or let it expire.

Kosachev, who chairs Russia's upper-house Foreign Affairs Committee, said the Trump administration needed to make up its mind now because the New START did not have an automatic renewal clause.

"Are we about to enter a new era? I think we need a quick answer to this question, and the best response would be a high-level agreement on new US-Russian consultations," the lawmaker concluded.