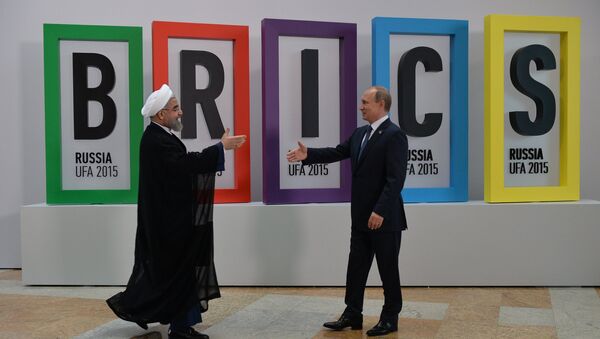 "I just received an order from Russian President Vladimir Putin to hold talks in Iran and discuss with our Iranian colleagues how we could intensify our bilateral trade and reach a preferential trade agreement," Shuvalov said.

At the same time, he noted, the positive results of trade negotiations will contribute to arranging the final details of Iranian President Hassan Rouhani’s visit to Moscow in March.

Iranian President Rouhani May Visit Russia in March Amid Cooperation on Syria
A free trade area within the Eurasian Economic Union (EAEU) is expected to be a the first major step in strengthening trade relations and will also put Moscow-Tehran trade cooperation to a new level, according to Mahmoud Shoori, head of Eurasia Program at Center for Strategic Research (CSR).

"Trade between Russia and Iran has been in intense discussions for the recent three years. Both sides are now doing their best to expand and develop bilateral trade ties. A lot has been done on the issue, including important agreements," Shoori told Sputnik Persian.

According to the analyst, the most important and at the same time problematic matter is the matter of Iran’s integration into the EAEU, i.e. the "matter of multilateral cooperation."

Iran to Sell Russia 1.5 Mln Barrels of Oil in Exchange for Technology, Services
Functioning since 2015, the EAEU is a Russia-initiated regional political and economic bloc that aims to streamline the flow of goods and services between its member states: Russia, Armenia, Belarus Kazakhstan and Kyrgyzstan.

"This issue has long been discussed. Several rounds of talks have already been held between EAEU members and Tehran. Now, we see significant progress on the issue, including considering a major free trade area deal with Iran. In fact, this would be the first serious step to strengthen Russian-Iranian trade ties. Unfortunately, previously there has been the lack of political will to do that," Shoori said.

According to the Eurasian Economic Commission (EEC), the signing of a full-fledged free trade area agreement between the EAEU and Iran will contribute to GDP growth in all EAEU member countries.

Iran, EAEU May Sign Temporary Deal for Future Free Trade Zone
"According to the results of the EEC econometric analysis, conducted within the framework of the joint research with Iran on the expediency of free trade area establishment, a sufficient potential of GDP growth for all EAEU member states was deduced (plus $27 million for Armenia, plus $78,6 million for Belarus, plus $508,6 million for Kazakhstan, plus $12 million for Kyrgyzstan, plus $1,3 billion for Russia)," the commission said in a statement in late-December.