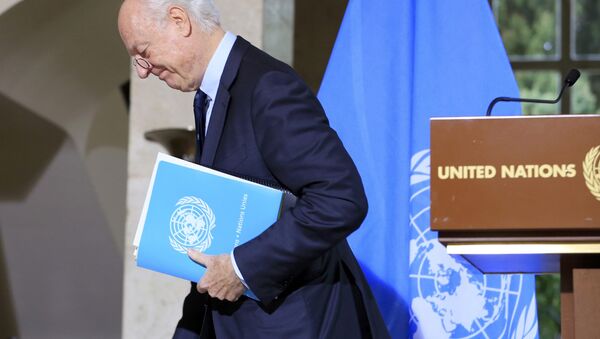 © REUTERS / Pierre Albouy
Subscribe
International
India
Africa
Syria Staffan de Mistura gave a procedural paper to the delegations of the Syrian government and the High Negotiations Committee on Friday, in which he called on all parties to respect each other.

Syrian Social Nationalist Party May Visit Moscow to Discuss Geneva Talks
GENEVA (Sputnik) — UN Special Envoy for Syria Staffan de Mistura gave a procedural paper to the delegations of the Syrian government and the High Negotiations Committee (HNC) on Friday, in which he called on all parties to respect each other and laid down his suggestions on the format of the current round of the talks, Sputnik has learned.

According to Sputnik's source in one of the delegations, the provisions of the procedural paper suggest that "the parties respect each other and confidentiality and abstain from offenses."

The UN special envoy expresses his support for direct talks and also suggests focusing on three main topics — governance, constitution and elections — and devoting at least one day of the talks to each of these topics, according to the source.

De Mistura also proposes the formula "nothing is agreed until everything is agreed" for the talks in his procedural paper, the source added.

"It is suggested to devote at least one day for discussion of the three main topics (governance, constitution, elections). It [the paper] allows parallel discussion of these issues and creation of the working groups," according to Sputnik's source.

As for the issues of fight against terrorism and ceasefire, the envoy proposes to leave it for the Astana format.

The delegations are expected to reply on Mistura's proposals at the upcoming meetings.