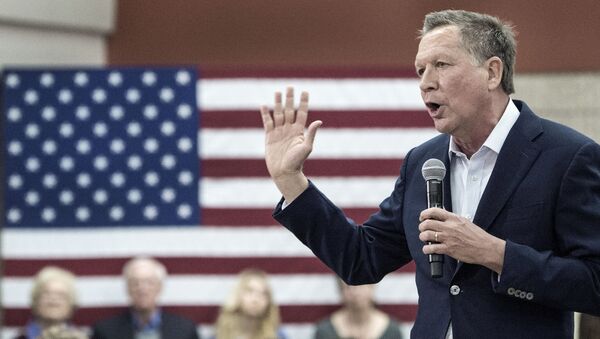 © AFP 2023 / PAUL J. RICHARDS
Subscribe
International
India
Africa
John Kasich told reporters he would present his plan on the US healthcare reform in a Saturday.

WASHINGTON (Sputnik) — Ohio Governor John Kasich told reporters he would present his plan on the US healthcare reform in a Saturday meeting with White House Chief of Staff Reince Priebus.

"Tomorrow, I’ll be meeting with Priebus… and sort of lay out the way in which we think we can reform it, save money and make sure that people are not left behind," Kasich said on Friday afternoon.

Kasich made the remarks after meeting with President Donald Trump earlier in the day.

"I am very optimistic that the president heard my concerns about the Affordable Care Act [Obamacare] and what we do to change it," Kasich stated.

Obamacare Approval Reaches New High in US
Kasich also noted that he was willing to support a draft proposal by Republicans to repeal and replace Obamacare if it aligns with key ideas of his team.

When sculpting a new healthcare legislation, Kasich added, the Trump administration should also address existing problems in the US pharmaceutical industry, including the high-cost of medications.

On Wednesday, Trump stated that his cabinet would have a replacement for Obamacare in mid-to-early March.