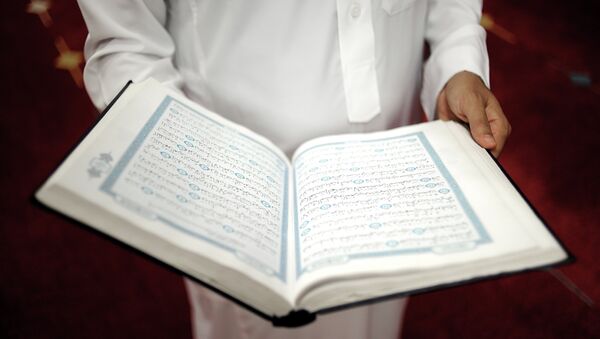 © AFP 2021
Subscribe
For the first time in almost half a century, Denmark will invoke blasphemy laws to charge a man who burned a copy of the Quran. The man performed the act as a protest against the presence of the religion of Islam in the Nordic country.

The 42-year-old Dane video-recorded the burning and posted it to the Facebook group "Yes to Freedom — No to Islam" with the commentary: "Be considerate to your neighbors: [the Quran] stinks when it burns."

Prosecutor Jan Reckendorff announced his decision to charge the man with blasphemy. "It is the prosecution's view that circumstances involving the burning of holy books such as the Bible and the Quran can in certain cases be a violation of the blasphemy clause, which covers public scorn or mockery of religion," he said in a statement.

The defendant's lawyer, Rasmus Paludan, claimed that the burning of the Quran was an act of self-defense. "The Quran contains passages on how Mohammed's followers must kill the infidel, i.e. the Danes," he said. "Therefore, it's an act of self-defense to burn a book that in such a way incites war and violence."

Translated to English, Danish Criminal Code Section 140 reads: "Those who publicly mock or insult the doctrines or worship of any religious community that is legal in this country, will be punished by a fine or incarceration for up to four months."

No one has been charged with blasphemy in Denmark since 1971, when two Danish radio hosts aired a satirical song mocking Christianity. They were found not guilty. Prior to that, there were only two other incidents of the law being invoked: four people who put up anti-Semitic posters were sentenced to jail in 1938, while two people who enacted a mock baptism were fined in 1946.

The law was the subject of controversy in 2006, when Danish prosecutors did not charge the Jyllands-Posten newspaper with blasphemy for printing cartoons depicting the prophet Mohammed.

In most branches of Islam, any depiction of Mohammed is strictly forbidden. Jyllands-Posten refused to remove the cartoons, even after protests broke out worldwide, leading to an estimated 200 deaths when some turned violent.

Although the blasphemy law has fallen into disuse, Denmark actively enforces a ban on "hate speech," defined by Section 266b of the Criminal Code as, "publicly or with the intention of wider dissemination, [making] a statement or [imparting] other information by which a group of people are threatened, insulted or degraded on account of their race, colour, national or ethnic origin, religion, or sexual inclination."

The International Civil Liberties Alliance (ICLA) notes that, unlike countries including the United States, the Danish ban on hate speech does not make an exception for true statements. Any statement that degrades a group would be a prosecutable offense under 266b, even if it is a demonstrable truth.

In 1997, a Danish artist burned a copy of the Bible while appearing on a publicly funded Danish Broadcasting Corporation news show. He was not charged with blasphemy or hate speech. In 2013, a man was charged with hate speech, but not blasphemy, for posting "the ideology of Islam is as abominable, atrocious, oppressive and as misanthropic as Nazism," on Facebook. He was convicted in February 2016.

Also in 2016, Danish Prime Minister Lars Løkke Rasmussen called for a law to ban radical imams who he called "hate preachers" from speaking publicly under the hate-speech law.

000000
Popular comments
Blasphemy to burn a book written and added to by many humans over 1400 years? Why is burning this book considered blasphemy in a supposedly secular country? Would the same apply to someone taking to burn the Bible or other so called 'holy books'?
terryjohnodgers
24 February 2017, 05:01 GMT
000000
I don't want to live in a world where one can't burn a book, any book, owned by its proprietary. That said, I love books and I have thousands of them in my home.