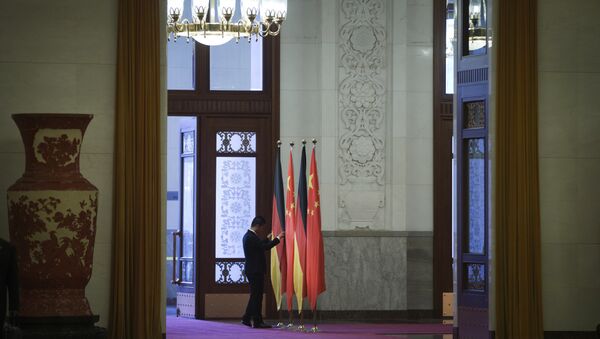 China has taken another step in global economic dominance after becoming Germany’s most significant international trading partner, a place once occupied by the US.

Germany sent and received with China goods and services worth approximately $180 billion in 2016, according to recent Federal Statistics Office data. France was Germany’s second-largest trade ally, while the US ranked third. In 2015, the US enjoyed a brief stint as Germany’s top trade partner, a spot occupied by France during the previous half-century.

The setback for the US comes in the wake of comments by US President Donald Trump’s top trade adviser, Peter Navarro, that Germany has capitalized on a “grossly undervalued” euro to expand Germany’s trade surplus, suggesting that a more diversified portfolio of trading partners would bode well for Berlin. Germany is just one of several targets the Trump administration has accused of exploiting currency manipulation practices, even though the euro’s monetary policy is determined by the 19 member states of the European Central Bank.

Optimism among exporters in China, the world’s third-largest economy, is “rising further,” according to Clemens Faust of the Ifo Institute for Economic Research, a Munich-based think tank.

​German Vice Chancellor Sigmar Gabriel has advocated that the EU pivot economic policy toward Asia if Trump follows through with protectionist, beggar-thy-neighbor policies.

Australia does more trade with China than the US, according to Ian Bremmer, president and founder of the Eurasia Group, a global political risk consulting firm. “South Korea enjoys higher trade volumes with China than with the US and Japan combined,” Bremmer wrote in a blog post. “Welcome to the China Decade,” the New York University researcher said in 2015.

The year of 2016 also proved to be a year in which Germany’s trade surplus reached a record high of 252.9 billion euros, Trading Economics reported on February 9.