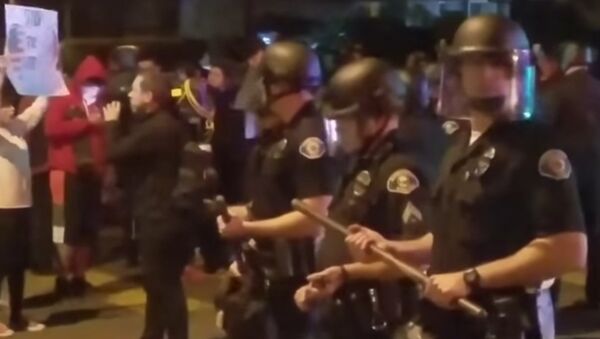 © Wochit News
Subscribe
On Wednesday night protests erupted in Los Angeles in response to an off-duty Los Angeles police officer firing his weapon at an unarmed teenage boy. Demonstrators called for charges against the officer as they thronged the neighborhood where the confrontation took place.

Anaheim Police Department Sgt. Daron Wyatt told local news that a total of 24 protesters, consisting of eight women and ten men, as well as three female and three male juveniles, were arrested on misdemeanor charges of resisting arrest and battery on a peace officer and failure to disperse.

​Some attendees reportedly tried to enter the officer’s house, after shattering windows on the house and his car. Windows on several other homes and cars in the neighborhood were broken as well, along with the windows of an Anaheim police car.

The fight between the teenager and the officer was captured on a cellphone. Law enforcement claimed that the altercation began because teenagers were continuously walking across the police officer’s lawn. According to Anaheim police, the boy threatened to shoot the officer, and in the heat of the scuffle the officer drew and discharged his weapon. Accounts of the teen’s comments point out that the boy yelled at the officer that he was going to sue, not shoot, him. No one was struck in the shooting.

In the nearly nine-minute video, posted to Youtube by the 13-year-old boy’s father, about a dozen or so students are seen as the officer argues with a young girl walking across his lawn before the boy comes to her defense, subsequently scuffling with the officer on the sidewalk.

​The officer was not arrested but has been placed on administrative leave. The 13-year old was taken into police custody along with another 15-year-old boy and was later released from a juvenile facility.

"I said, 'Hey, that's not how you treat a lady," the boy told KTLA, "And then he came at me…. He hit me. I ran to the street to run away from him, and he got me. He tried to trip me and then he kicked me in my testicles."

In a separate demonstration hundreds of protesters brought traffic near Disneyland to a halt, later throwing bottles and rocks at riot police who arrived on the scene. One man was shot with a beanbag after shoving two officers.

Jennifer Rojas with the ACLU of Southern California remarked that, "An officer, even off duty, has an obligation to follow the law and protect public safety, rather than threaten it," adding that, "The LAPD officer's actions on the video are grossly irresponsible."