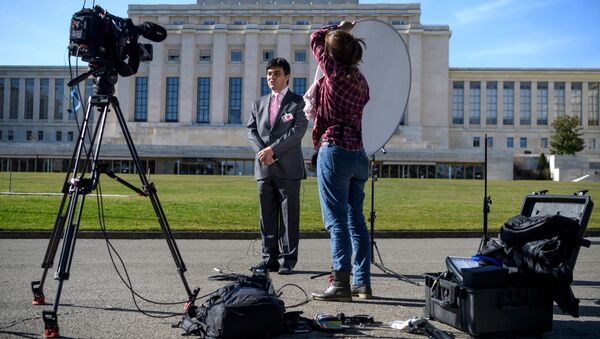 © AFP 2023 / FABRICE COFFRINI
Subscribe
International
India
Africa
US Special Envoy for Syria Michael Ratney will represent Washington at the intra-Syrian talks in Geneva that are officially kicking off on Thursday, a diplomatic source told Sputnik.

Moscow Facilitates Direct Syria Talks in Geneva - Cairo Opposition Group
GENEVA (Sputnik) — The US diplomatic source confirmed that Ratney is in Geneva this week and would remain in close contact with the United Nations and with Syrian opposition members at the UN-led talks.

Ratney will also attend the welcoming address by UN Special Envoy for Syria Staffan de Mistura with participation of all Syrian sides to the negotiations, scheduled for 3 p.m. local time (14:00 GMT), according to the source.

The International Syria Support Group (ISSG) is invited to attend the welcome address as observers. Russia and the United States are co-chairs of the ISSG.